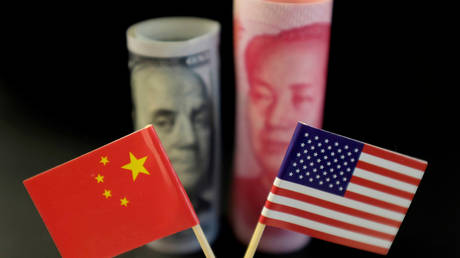 The Chinese foreign ministry has questioned the timing of “negative” US comments during state visits to Japan and South Korea, and the announcement of new sanctions on China, as the two nations prepare to meet on Thursday.

Speaking on Tuesday, foreign ministry spokesman Zhao Lijian said Beijing hoped the US would approach the Alaska talks in a “constructive manner,” and urged Washington to drop its recent “microphone diplomacy” and realize that ganging up on China is “a waste of effort and useless.”

Zhao questioned the US’s decision to ramp up pressure on Beijing so soon before the Chinese diplomats met the new US administration for the first time. “Recently, the US has made a series of negative words and deeds related to China. This happened on the eve of the upcoming high-level strategic dialogue between China and the United States. The timing is intriguing.”

The spokesman noted that Beijing hopes the meetings in Alaska will promote “the healthy and stable development of Sino-US relations” but accepted that a single dialogue is unlikely to solve all issues between the two nations.
Zhao asserted that China would not compromise on issues related to sovereignty and security. “The determination and will to safeguard [our] core interests is unwavering,” he noted.

On Wednesday, Washington sanctioned 24 Chinese and Hong Kong officials over what it sees as Beijing’s crackdown in the former British colony. The move comes after the US and Japan released a joint statement on Tuesday that warned against China’s “coercion and destabilizing behavior” in the region, irking Beijing.

Chinese and US officials will meet in Alaska on Thursday evening. It will be the first time US Secretary of State Antony Blinken has met his counterparts from Beijing.