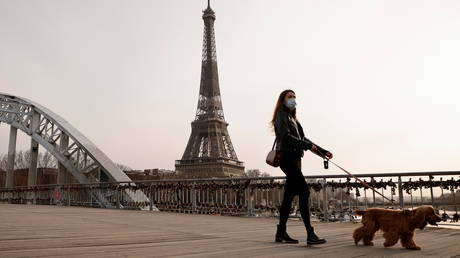 Some 16 areas of France, including the capital, Paris, will be locked down for four weeks from Friday in a bid to curb the third wave of Covid-19 infections, Prime Minister Jean Castex announced on Thursday evening.

Among the country’s departments – or regions – targeted by health chiefs in the latest restrictions is Alpes-Maritimes on the French Riviera, which contains the city of Nice and was already put under weekend lockdown last month.

Non-essential retailers in the 16 areas will be forced to close and residents will only be allowed to travel a maximum of 10 kilometers from their home, while schools will be allowed to remain open.

France’s national curfew, in place since January, will remain in place alongside the new health measures, but will start an hour later, at 7pm, and run until 6am, to coincide with the start of summer, Castex said.

“More and more, this is looking like a third wave,” he told a news briefing as he outlined the measures, which affect nearly 21 million people in total.

On January 16, the French government enacted a national curfew that was supposed to last for just 15 days, but the spread of the UK variant of Covid-19 in particular has forced health chiefs to extend –and to impose new– health measures.

For weeks epidemiologists have been concerned by the spread of the virus in the wider Ile-de-France region that surrounds Paris and is the country’s most populous area. The region’s Covid-19 incidence rate is 418 new cases per 100,000 people, having grown steadily in recent months, with the high level of infection putting severe pressure on health services in the capital.

On Thursday, France registered close to 35,000 new Covid-19 cases, after posting its highest daily increase for four months a day earlier, with 38,501 infections, according to health ministry data. More than 91,600 people in total have died with the virus.