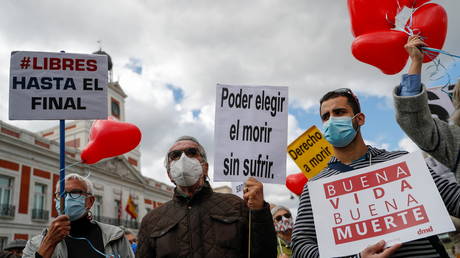 Lawmakers in Spain have voted to legalize euthanasia and assisted suicide, making it only the fifth country globally to make the practice legal after the Netherlands, Belgium, Luxembourg and Canada.

The law will come into force in three months’ time after the landmark vote passed in the lower house of the Spanish parliament by 202 votes to 141, with two abstentions.

People wanting to end their life must “suffer a serious and incurable disease or a serious, chronic and incapacitating condition,” the new law states.

The whole process will take up to 40 days from the patient’s first request until a doctor’s final approval, and the patient must give their written consent twice within 15 days.

Previously, assisting somebody’s death in Spain carried a jail term of up to 10 years.

However, outside the building there were reports of protests from religious groups who are against euthanasia.

Supporters of the far-right Vox party were among the demonstrators, while a spokesperson for the party vowed to oppose the law in Spain’s Constitutional Court.

The euthanasia debate in majority-Catholic Spain was reignited in 2019 when Angel Hernandez was arrested in Madrid for administering a lethal injection to his terminally ill wife, Maria Jose Carrasco.

Hernandez filmed himself giving a lethal dose of sodium pentobarbital to Carrasco, who was suffering with multiple sclerosis and had given her consent for the injection.

He is due to stand trial in a gender violence court this year and the Prosecutor’s Office has requested he be handed a six-month prison sentence.

A 2019 opinion poll found that almost 90 percent of Spaniards are in favor of decriminalizing euthanasia.