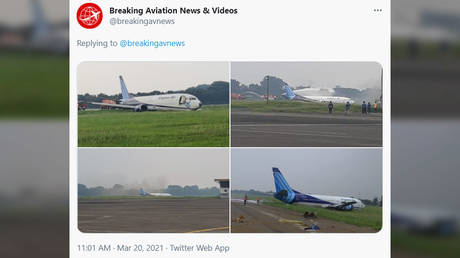 A Trigana Air Boeing 737 freighter has ended up in a field after crash-landing and going off the tarmac in Indonesia’s capital Jakarta on Saturday. There were no casualties, officials have said.

Footage from the scene published on social media shows the large aircraft having a rough landing on the runway at Halim Perdanakusuma International Airport in the Indonesian capital.

White smoke comes from the plane’s belly as it skids off the tarmac and stops at a grass field, with its fuselage remaining intact.

Indonesian newspaper Kompas, citing the country’s Transport Ministry spokesperson, reported that there were no casualties.

Flights to and from the airport were rerouted to Jakarta’s Soekarno-Hatta Airport.

The cause of the incident is currently unclear.