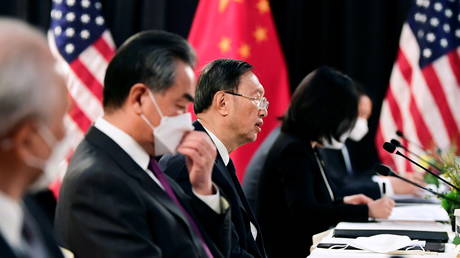 While talking to the media after meeting with their US counterparts, top Chinese diplomats have emphasized that they will stay firm in defending their national interests.

“There are so many major differences sitting between the two sides,” Chinese foreign policy official Yang Jiechi told journalists in Alaska. According to Yang, who spoke to the press alongside China’s foreign minister, Wang Yi, although Beijing believes that both countries “should follow the principles of no confrontation and conflicts,” it will remain firm on the issues involving its domestic policies and interests in the region.

“We have reiterated to the US once again [that] sovereignty and territory are principle issues… We hope the US is not going to underestimate China’s determination to defend its territory, to safeguard its people and maintain its righteous interests,” Wang said.

Meanwhile, Secretary of State Antony Blinken, who represented the White House at the meeting in Anchorage together with US National Security Advisor Jake Sullivan, highlighted “a number of areas where [Washington and Beijing] are fundamentally at odds.”

Among those areas, the US official once again mentioned the issue of Xinjiang. Washington and its Western allies have frequently accused Beijing of human right abuses in the region – allegations dubbed “absolutely ridiculous and completely contrary to the facts” by China. Blinken also pointed towards the situation in Hong Kong, the former British colony where protests against central government have been taking place. Earlier this week, Washington sanctioned a number of Chinese officials over what it sees as Beijing’s crackdown on the city’s semi-autonomous status, while China regards it as “serious interference in [its] internal affairs.”

“It’s no surprise that when we raised those issues, clearly and directly, we got a defensive response,” Blinken told reporters after two days of talks.

According to the US diplomat, the delegation faced “tough and direct talks,” exactly how they expected them to be. However, there are still areas where American and Chinese interests intersect, and they aim to carry on with dialogue, senior diplomats on both sides agreed.

On Thursday, when the counterparts met for the first time face-to-face after the new US administration took office, talks became quite heated on a number of issues. The Washington and Beijing delegations exchanged harsh words and accused each other of attempting to undermine global stability.