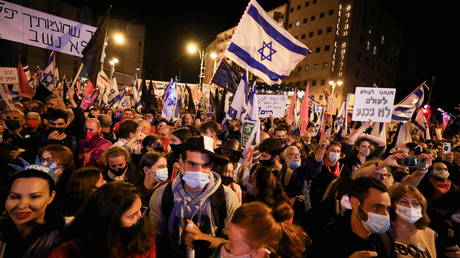 Tens of thousands took to the streets in Israel to protest Benjamin Netanyahu’s leadership, only days before the country’s next election.

Approximately 50,000 have participated in the protests, according to the Black Flag Movement, which organized the demonstration. Other estimates from local media put the total in Jerusalem closer to 20,000.

Thousands marched on Saturday from the Knesset building to Balfour Street chanting slogans such as, “go, Bibi, go!”

After the march, thousands gathered near the prime minister’s official residence.

“In three days, he’s gone!” Israeli actor and activist Lior Ashkenazi told the crowd at one point. “The most stubborn protest Israel has ever known, and perhaps even the most justified, overthrew the government and gave us all the opportunity to re-elect our leaders. Our future.”

Floods of black and pink flags could also be seen throughout the sea of people, black representing the Black Flag Movement, which has been behind multiple anti-Netanyahu demonstrations, and pink representing the the ‘Pink Front,’ one calling for a ‘pink world’ devoid of corruption and discrimination.

Clashes between the demonstrators and pro-Netanyahu protesters were reported by Yael Shomer, a member of the Black Flag protest movement, who said she was assaulted at a Herzliya interchange, as well as by participants at a Hemed Interchange, according to the Jerusalem Post.

Anti-Netanyahu protesters have been taking to the streets across Israel for months now, demanding change. This latest demonstration has occurred only three days before the election, the country’s fourth in two years.

Netanyahu was indicted while in office last year on charges of corruption, though he has denied wrongdoing and described the accusations as a political witch hunt.

Opposition leader Yair Lapid challenged the premier to a televised debate ahead of the March 23 election, but Netanyahu declined.