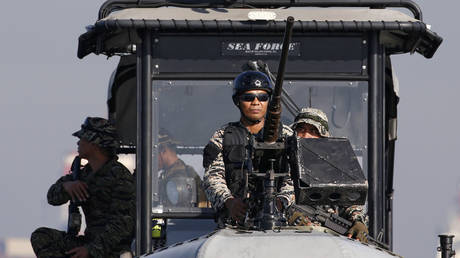 The Philippines’ defense minister has called on Beijing to withdraw boats detected in the South China Sea, describing their presence in the disputed area as a violation of his nation’s maritime rights.

Defense Secretary Delfin Lorenzana claimed on Sunday that 220 boats belonging to Chinese forces were operating within the Philippine Exclusive Economic Zone, and appealed to Beijing to remove them.

The vessels have encroached on the Philippines’ “sovereign territory” and their presence is “a clear provocative action of militarizing the area,” Lorenzana said in a statement.

The defense secretary added that the Philippine Coast Guard would work with the government to undertake “appropriate action” aimed at “maintaining peace and stability” in areas of the South China Sea which are included in the Philippines’ exclusive economic zone.

The body of water has become a major point of conflict between Beijing and some of its regional neighbors, as well as the United States. Washington has insisted on the right to move naval vessels freely through the sea, citing so-called “freedom of navigation.” The presence of the US naval vessels has been repeatedly condemned by Beijing as a provocation.

The Phillipines’ growing frustration with China comes as the country attempts to negotiate with Washington over the presence of US troops on its soil. Last month, President Rodrigo Duterte said that the Pentagon would have to offer financial compensation before it could send US military personnel under the Visiting Forces Agreement.