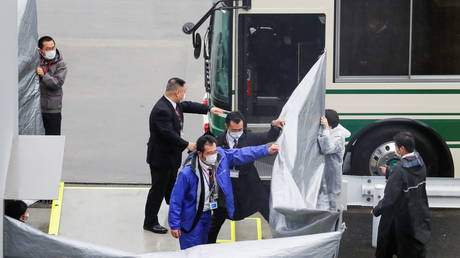 Michael and Peter Taylor have been officially charged with aiding a criminal escape over allegations that they helped illegally smuggle former Nissan chair Carlos Ghosn out of Japan in December 2019.

The father and son duo were transported to Japan to face trial earlier this month after losing a court battle to avoid extradition. They had been in US custody since their arrest in May 2020.

Prosecutors in Japan have argued that the pair got $1.3 million to help Ghosn escape from Tokyo, where he was out on bail while awaiting trial. Michael Taylor is a private security contractor who has reportedly helped plan nearly two dozen escapes, charging up to $2 million per operation. If convicted of aiding a criminal escape, the pair each face up to three years in prison.

As the two defendants are currently being held at a detention center in Tokyo, they have not commented on the recent charges. They haven’t denied aiding the escape but have argued they were just helping someone jump bail, which isn’t a criminal offense in Japan. Their lawyers have previously claimed the extradition and court case are unfair, accusing prosecutors of subjecting the father and son to “mental and physical torture.”

The former Nissan chairman was arrested in November 2018, initially charged with underreporting his pay package over a five-year period, with further charges of aggravated breach of trust and understating his compensation added at a later date. If found guilty, Ghosn would have faced up to 10 years in prison and a fine of up to 700 million yen ($.644 million).

Japan issued an international arrest warrant following Ghosn’s escape but, as he’s now in his home nation of Lebanon, which doesn’t have an extradition treaty with Tokyo, it’s unlikely they’ll secure his transfer to stand trial.