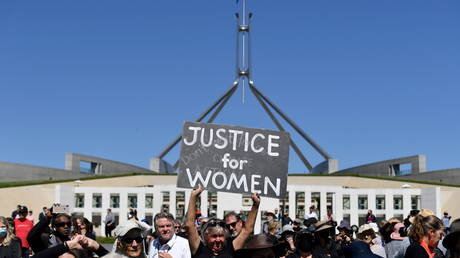 Australian parliament staffers have staged a protest after imagery was leaked that allegedly showed their male colleagues engaging in workplace sex acts. They decried the building as a “disgusting” place for women to work.

The sit-in protest was staged by the staffers on Tuesday in the parliament’s ‘prayer and meditation’ room. A whistleblower who gave the images and videos to the Australian 10 News channel over the weekend said the room has been mainly used for “a lot” of sex rather than for its original purpose.

Two dozen staffers, primarily women, gathered in the tainted room and condemned the parliament’s existing workplace culture. The group called for making the legislature a more comfortable place for women, with the protest organizer, Labor staffer Georgia Tree, condemning the culture of silence persisting in the parliament.

Since the beginning I’ve been told, ‘keep quiet. If anything happens to you, just shut up because that’s going to be the best thing for your career.’

One of the videos leaked by the whistleblower purportedly showed a staffer engaging in a solo sex act on the desk of his female MP boss. The man – not publicly named – has been already identified and fired.

“That someone would do that to their own boss is horrific, but that culture is pervasive,” Tree said. “It’s disgusting. It’s humiliating for us as women. I don’t know how I’m going to go back home and look my grandparents in the eye after working in this building this week.”

The explosive leak has further fueled the ongoing sex scandal that has been rocking the Australian government for weeks already. It kicked off after a former Liberal staffer Brittany Higgins claimed she had been raped by a male colleague in the office of Defense Minister Linda Reynolds.

The minister further contributed to the outrage when she was reported to have described Higgins as a ‘lying cow’. Reynolds was ultimately forced to withdraw her remark and apologize to the former staffer.

The issue was yet again addressed by Australian PM Scott Morrison, who said he was “shocked” and “disgusted” by the latest leaks. He also acknowledged the shortcomings in the government response to the enduring sex scandal and urged the parliament “get this house in order.”

“We must put the politics aside of these things, and we must recognize this problem, acknowledgment, we must fix it. This has been a very traumatic month,” Morrison told a press briefing, urging women of the parliament – MPs, staffers and journalists alike – to “stand with” him.

“There has never been a more important time for women to stand in this place…I want to see more women in this place.”

The idea of tackling sexual misconduct by bringing more women into the parliament has been also floated by Industry Minister Karen Andrews. She said she has had a “gutful” of bad treatment of women in the legislature, as well as in other places.

“Continuing the way we have, to attract women, has clearly not been anywhere near as successful as it needs to be,” Andrews told ABC, suggesting that the Liberal Party should consider quotas to bring in more women into the legislature.

At the same time, quotas could be a slippery slope, the minister admitted, as they would reinforce “the narrative that women are only there because they’re a number.”