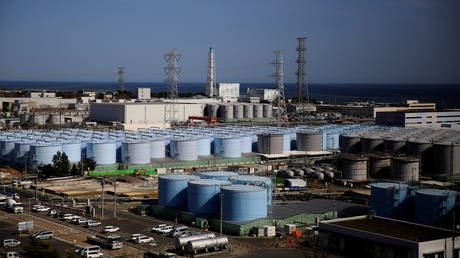 Tokyo has asked the UN nuclear watchdog for support and back-up for its plans to empty a huge stash of radioactive water stored around the Fukushima power plant into the sea – a plan that’s sparked fears of an ecological disaster.

The matter of how to dispose of the tainted water was raised during virtual talks between Japan’s economy minister Hiroshi Kajiyama and the director general of the International Atomic Energy Agency (IAEA), Rafael Grossi, on Tuesday.

Tokyo has asked the watchdog to evaluate the plans and methods to be used in the disposal of water Japan describes as having been “treated.” While no official announcement has been made, the primary option reportedly under consideration is for it to be released into the ocean over the course of many years. The Japanese government is in “final-stage coordination” on the issue, Kyodo News reported.

Now Japan is seeking to recruit the IAEA to convince the global community that its plans to deal with the water is solid and safe, believing the watchdog would be “extremely effective” in doing so.

“It has become increasingly important to dispel concerns and reputational worries over the safety of the water which have been raised domestically as well as from our neighboring countries,” Kajiyama told the media before the talks.

In turn, Grossi signaled that the UN agency was ready to back Japan and carry out a safety review of the chosen plan, whatever it might be, saying he was convinced of Tokyo’s determination and technological capacity to pull off the challenge.

“We’re very close to starting our cooperation with Japan on the handling of Fukushima’s ALPS [Advanced Liquid Processing System] treated water before, during, and after its disposal. Japan is a key partner for the IAEA,” Grossi said on Twitter after the talks.

Excellent conversation today with ?? @METI_JPN‘s Kajiyama Hiroshi. We’re very close to start our cooperation with Japan on the handling of #Fukushima’s ALPS treated water before, during and after its disposal. Japan is a key partner for the @IAEAorg. pic.twitter.com/PHZlY9EyFl

The Fukushima plant suffered a major meltdown in 2011, following a 9.0-magnitude earthquake and subsequent crippling tsunami.

In the years since, the plant has generated a large stash of contaminated cooling water that is being stored in large tanks around the premises. The tanks currently hold some 1.2 million tons of radioactive liquid and the plant is expected to run out of space to store any more by 2022.

The plans to release the water into the ocean have been repeatedly criticized by environmentalist groups, which have warned it may prompt an unprecedented ecological disaster. Greenpeace accused the Japanese government of distorting the situation last October when it described the water as having been “treated.”

The environmental group claimed the water contains “dangerous levels of carbon-14,” that have the “potential to damage human DNA.”