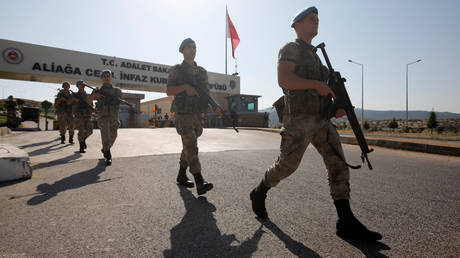 Turkish authorities detained 203 soldiers on Tuesday, as security forces conducted raids on people accused of having ties to Muslim cleric Fethullah Gulen, who Recep Tayyip Erdogan says was behind the 2016 attempted coup.

The operation, which took place in 53 provinces, as well as Turkish-controlled Cyprus, came after the Chief Public Prosecutor’s Office issued arrest warrants for the suspects over claims they are linked to Fethullah Gulen and the Gulen movement, called the Fethullah Terrorist Organization (FETO) by the nation’s authorities.

The individuals detained in Tuesday’s raid allegedly communicated with individuals working for FETO, known as ‘covert imams’ by authorities, using pay phones. It’s not clear what they are accused of discussing with these ‘senior FETO operatives.’

Erdogan and his government have maintained that Gulen, who has lived in self-exile in the United States since 1999, orchestrated the 2016 attempted coup that resulted in the deaths of 251 people and injury of 2,734. Gulen has repeatedly denied any involvement.

Maintaining that Gulen was behind the coup, the Turkish government formally demanded the extradition of Muslim cleric in 2016, calling on the US to hand him over or risk damaging Washington-Ankara relations. America has, so far, refused their request and Gulen is still believed to be living in Pennsylvania.

The 2016 coup attempt saw members of Turkey’s military launch an offensive in the country’s central cities, including Ankara and Istanbul, attacking the parliament and kidnapping the chairman of the Joint Chiefs of Staff. However, hours after the action began, pro-coup forces surrendered after residents joined loyalist soldiers and police to prevent the coup from gaining momentum.

In the wake of the failed attempt to remove Erdogan from power, the government detained 80,000 people and over 150,000 lost their jobs, and the country’s security forces regularly conducted crackdowns to find those they believe to be linked to the insurgency.