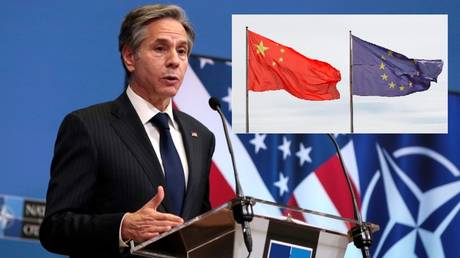 US Secretary of State Antony Blinken voiced no new objections to the recent investment deal signed between China and the EU, but said it was up to Beijing to uphold its promises to Europe and prove they aren’t “just talk.”

Despite earlier misgivings voiced by the US, the EU moved to sign the investment deal with China in late December. As part of the agreement, which is yet to be ratified by the European parliament, Beijing vowed to uphold international labor laws and allow more European involvement in the Chinese economy.

During a press conference at a NATO meeting in Brussels, Blinken was asked if the deal would create problems in relations between Washington and Europe – and if the Biden administration would try to persuade the EU to do less business with China.

“Our judgment is that the onus is really going to be on China to demonstrate that the pledges it’s made on forced labor, on state-owned enterprises, on subsidies aren’t just talk,” Blinken said, stopping short of criticizing the agreement and adding that it’s up to Beijing to “follow through on the commitments that it’s made.”

Blinken called the EU “a partner of first resort” for the US, saying that the sides will hold “close consultations” on China, during which the Biden administration will share its concerns, including those related to trade, investment and human rights.

“When we’re working together; when we’re speaking with one voice we are much stronger and much more effective” in resisting “China’s aggressive course of action,” Blinken insisted.

The US and the EU demonstrated such unity when they imposed sanctions on Chinese officials for alleged human rights abuses in Xinjiang, together with the UK and Canada, earlier this week.

Beijing’s tit-for-tat response to the restrictions prompted the European Parliament to cancel a Tuesday meeting during which the investment deal was to be discussed.

Responding to the decision by the MEPs, Chinese Foreign Ministry spokesperson Hua Chunying reminded Brussels that the agreement was mutually beneficial, but not a “gift” given by one side to the other.