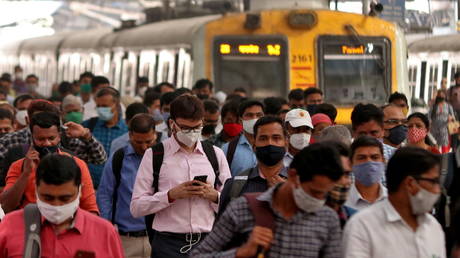 Health authorities in India said they have detected a new “double mutant variant” of Covid-19 in the country, in addition to the British, South African and Brazilian strains that have led to a surge in new cases in recent weeks.

On Wednesday, officials in India reported 47,292 new coronavirus cases, the highest single daily rise since November – and double the amount of cases reported a week ago.

A network of 10 government laboratories that analyze thousands of swabs daily has detected the new variant in between 15% and 20% of samples collected in Maharashtra, India’s second-most populous state.

Officials say the double variant – “the E484Q and L452R mutation” – is associated with “increased infectivity” and was first discovered in samples taken in December. Mumbai, a city of some 21 million and the state capital of Maharashtra, has reported more than 3,000 new Covid-19 cases daily since the start of the week.

India’s health officials have recommended increased testing, better contact tracing and the prompt isolation of those who test positive to deal with the new mutation, adding that it has “not been detected in numbers sufficient to either establish a direct relationship or explain the rapid increase in cases in some states.”

The labs have also identified 771 other “variants of concern” in more than 10,000 recent samples analyzed at the government laboratories. The majority were the British variant, and the South African variant and one case of the Brazilian mutation were also detected.

Over the past year, India has reported more than 11.7 million cases of coronavirus and recorded some 160,000 Covid-related deaths.