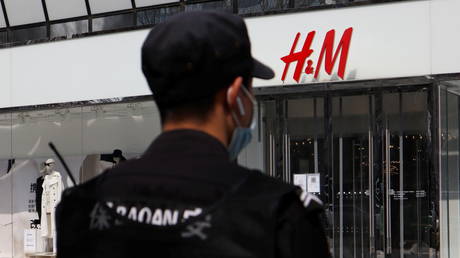 The Chinese foreign ministry has dismissed accusations made by clothing giants Nike and H&M that Xinjiang cotton is harvested using forced labor, and hit back at the US by highlighting its historical use of slave labor.

Speaking on Thursday, Foreign Ministry spokeswoman Hua Chunying said she would pay no attention to statements made by Nike and H&M concerning forced labor in Xinjiang, and labeled the accusations “rumor and slander.”

“These lies were first instigated by a few so-called scholars and the media, and then some anti-China forces followed up with the hype. This incident itself is extremely wrong, spreading rumors and slandering China.”

Hua said Beijing was open-minded and happy to welcome foreign companies to operate in China, but would not put up with malicious attacks by firms that were based on rumors and lies.

The Chinese market is here. We don’t need to engage in special coercion, but one thing is certain: nowadays, Chinese people do not allow foreigners to eat Chinese food while smashing Chinese bowls.

Turning her attention to the US, Hua stated that the accusations of forced labor were misplaced. The spokeswoman produced two photos, one of which was black-and-white and showed a historical scene of black slaves being forced to pick cotton by hand, and another, which was in colour, that showed a field being ploughed by a combine harvester recently in Xinjiang. She claimed that 40% of Xinjiang’s cotton fields have been mechanized.

Earlier this week, both Nike and H&M registered their concern about reports of forced labor in the Xinjiang autonomous region, and the latter has ended its relationship with a Chinese yarn producer as a result.

The statements by the two companies have been poorly received in China, with state media encouraging citizens to boycott them. The move has even seen Chinese influencers cancel their contracts with the brands – singer and actor Wang Yibo terminated his Nike contract on Thursday.

The alleged human rights abuses in Xinjiang have been heavily criticized in the West. On Tuesday, in a joint statement, Australia and New Zealand welcomed the decision of the US, EU, Canada, and Britain to impose sanctions on senior Chinese officials.

Beijing denies any wrongdoing and has urged the West to stop interfering in China’s internal affairs.