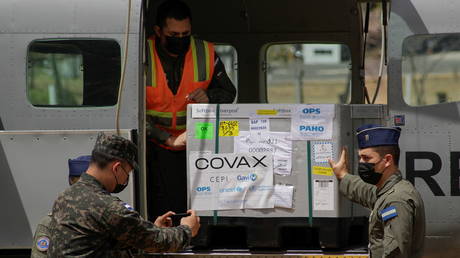 COVAX co-leader GAVI has warned that India’s delay in granting export licenses for Covid-19 vaccines amid a domestic spike in cases is hurting the rollout in poorer countries relying on the jabs to bring the virus under control.

The Serum Institute of India, which is the largest supplier of doses to the COVAX scheme, has been told by India to halt exports for “two to three months,” due to an increase in domestic demand as cases rise, which is threatening to impact the global vaccine program.

“Deliveries of Covid-19 vaccines to lower-income economies participating in the COVAX facility will face delays, following a setback in securing export licenses for further doses,” a spokesperson for the Global Alliance for Vaccines and Immunization (GAVI) said on Thursday.

India has been experiencing a spike in cases in recent weeks, and the discovery of a new “double mutant” variant has raised fears of a second wave overwhelming the nation’s health services. It is not yet known how widely spread the newly detected strain is.

COVAX has said it is in talks with India’s government in an attempt to address potential delays to deliveries “as quickly as possible.” The Foreign Ministry hasn’t yet commented on the situation.

The issues with India come as CanSino Biologics, a Chinese vaccine manufacturer, announced that it was planning to provide the COVAX scheme with “tens of millions of doses” between late 2021 and the end of 2022. It didn’t reveal the specific number, but said the deal was made at “a very competitive price,” and CanSino would be willing to provide doses “beyond 2022, if there was still an expectation to do so.”

The CanSino jab is the fourth Covid vaccine to be domestically developed, alongside Sinovac, Sinopharm, and CoronaVac, all of which have applied to be used by COVAX.

The COVAX scheme is currently aiming to deliver enough Covid vaccines to inoculate 27% of the world’s population by the end of 2021, with 238 million doses set to be distributed by the end of May. It is not yet clear how the delays in shipments from India will impact this goal.