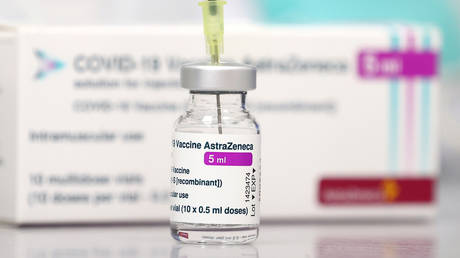 Denmark’s health authority has confirmed the country is extending the temporary suspension of the use of the AstraZeneca Covid vaccine for three more weeks, as it can’t rule out a connection between the jab and blood clots.

Speaking at a press conference, the Danish Medicines Agency’s acting director of pharmacovigilance, Tanja Erichsen, said health officials were extending the prohibition on the use of the AstraZeneca vaccine over concerns about “presumed side effects”.

Denmark initially suspended the use of the AstraZeneca vaccine on March 11 for precautionary reasons, alongside Norway and Iceland, due to fears about it causing blood clots. However, while Iceland has resumed inoculations using the pharmaceutical company’s vials, Denmark and Norway are still investigating.

“It can’t be ruled out that there is a connection between the vaccine and the very rare blood clot cases,” Erichsen said, warning that these are not “ordinary blood clots”.

The authorities did not give an indication when their assessment into the vaccine’s safety would be completed, but said the evaluation would take at least three more weeks.

In the past month, more than 10 European nations – including France, Germany, Italy, and Spain – have suspended the use of the AstraZeneca jab over clotting concerns, amid reports of a death from a coagulation disorder and illness caused by a pulmonary embolism. While most nations have since resumed use of the vaccine, Denmark, Sweden, and Norway are cautiously maintaining the temporary suspension while they investigate whether it is safe.

The decision by Denmark’s Medicines Agency to maintain the temporary suspension comes despite the European Medicines Agency and the World Health Organization both stating that the benefits of the AstraZeneca jab outweigh the risk, and noting that there have been fewer than 40 cases of clots among the more than 17 million people who have received the vaccine.

Denmark began its vaccination program in December and has approved four vaccines – from AstraZeneca, Johnson & Johnson, Moderna, and Pfizer. So far, the country has administered 808,702 doses. Since the start of the pandemic, it has reported 227,031 confirmed cases of the virus and 2,403 deaths from the disease.