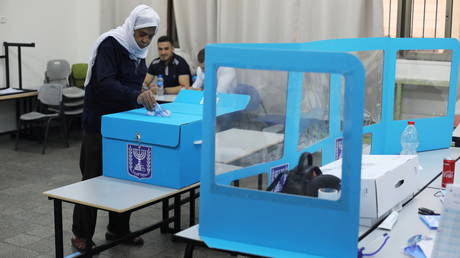 The United Arab List (UAL), a small Palestinian-Israeli party, is set to clinch five seats in Israel’s election, and though the number is small, it could cast the party as kingmaker in a race that is going down to the wire.

With vote-counting drawing to a close, the Islamist UAL appears to have secured a handful of seats in the 120-member Knesset. It could make all the difference for Israeli Prime Minister Benjamin Netanyahu as the election, and his own career, hang in the balance.

Exit polls show Netanyahu’s Likud party as the largest party in the country’s unprecedented fourth election in two years, with 31 seats. The pro-Netanyahu bloc looks to have secured 52 seats – but it needs to secure a 61-seat majority in order to form a coalition government. Its opponents, an anti-Netanyahu coalition of parties, also looks set to fall short.

Without another small party switching sides, each bloc would have to seek the support of UAL’s leader Mansour Abbas to come to power and avoid yet another round of elections.

Speaking to Israeli television on Wednesday, Abbas – who has also said his party would make decisions based on Arab interests – did not rule out cooperation with either side. “We are not in anyone’s pocket. I am ready to talk to everyone,” Abbas said.

When asked in another interview whether he could really work with Netanyahu – whose refusal to compromise with Palestinians has been a hallmark of his decade-plus tenure as PM – Abbas said, “The issue is not with Netanyahu” personally.

For its part, the Likud party is split on the idea of seeking UAL’s support, according to the Haaretz newspaper. However, leading deputy Miki Zohar has reportedly told Israel’s public broadcaster that there was no possibility of Netanyahu forming a government with the support of Abbas.

In a series of tweets, however, Zohar later said, “It is our duty to do everything, everything, to prevent the fifth election. All available political options must be exhausted in order to form a government that works in the interest of all citizens of Israel because this is what is important for our country at the present time.”

The ultra right-wing Religious Zionist Party, which has won six seats, might complicate things further, firmly rejecting any partnership with the Islamist UAL.

The PM himself has yet to publicly address the possibility of working with Israel’s Arab minority. In prior elections, however, he has stoked fears of Arabs “voting in droves” and pushed for the installation of cameras and observers at poll centres in Arab-dominated areas.

With an electoral defeat likely signalling the end of his political career and potentially leaving him open to a prison sentence on corruption charges, however, an olive branch to the Arabs is seen as likely an outcome as any other.