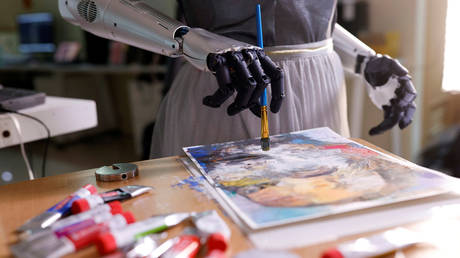 Artwork by a world-famous robot that was digitized in the form of a non-fungible token (NFT) was sold at auction for more than half a million dollars, amid a boom in the crypto-art scene.

The humanoid bot, Sophia, worked with Italian digital artist Andrea Bonaceto to create her masterpiece. The robot combined aspects of Bonaceto’s paintings and her programmed knowledge of art history to create the self-portrait. Bonaceto himself is a well-known portrait painter, having depicted a number of high-profile individuals, including Tesla CEO Elon Musk.

Bonaceto began the process by creating a portrait of Sophia, which was then processed by the robot’s neural networks. Sophia then painted her own interpretation of the image.

Created by Hong-Kong-based firm Hanson Robotics in 2016, Sophia has become a viral sensation over the years. The incredibly life-like bot, which is able to carry out natural-sounding conversations and make complex facial movements and expressions, has made appearances at numerous conferences and other events over the past five years. In 2017, Saudi Arabia granted her citizenship. In an interview from the same year, the robot said that, in the future, robots would become “digitally animated companions, humanoid helpers, friends, assistants and everything in between.”

Photographs of the robot-artist at work show Sophia, paintbrush in hand, adding the finishing touches to the piece. The robot’s creator, David Hanson, described the process that Sophia uses to paint as “iterative loops of evolution.”

The final results were digitally saved for posterity as an NFT – a digital signature stored on a blockchain ledger that allows anyone to verify ownership and authenticity of items.

The NFT, titled ‘Sophia Instantiation’, is a 12-second MP4 video file documenting Sophia and Bonaceto’s collaboration. The piece also includes a physical printout of the self-portrait.

The NFT sold for an impressive $688,888 at auction on Thursday. Numerous other paintings by the robot were also put up for sale.

The self-portrait’s buyer, a digital artist who goes by the name “888”, said he had “goosebumps” after winning the auction.

The auction followed the headline-grabbing sale of a collage of digital drawings, in the form of an NFT, which bagged $69 million. Titled ‘Everydays: The First 5000 Days’, the artwork was the first NFT to be sold at a major auction house.