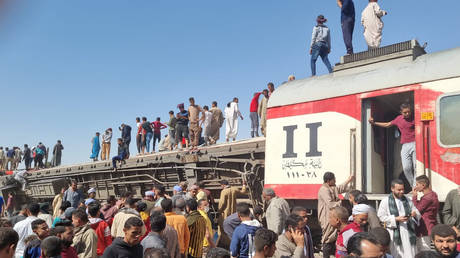 Two trains have collided near the Egyptian city of Sohag, killing 32 people and injuring at least 66 others. The country’s prime minister is chairing a crisis meeting in response.

Dramatic footage showed people trying to rescue passengers trapped inside the twisted wreckage outside Sohag, some 300 miles south of the capital, Cairo.

Some passengers who had escaped were seen lying on the ground injured.

?#BREAKING| Transport Ministry: the 2 trains in Upper Egypt’s Sohag collided after unknown passengers pulled the emergency valve of the first train, causing it to stop and get smashed by the other one from behind.#Egypt #Sohag #Africa|#طهطا #سوهاج #مصر pic.twitter.com/FDT2vSBPL3

At least 36 ambulances were sent to the site of the crash and took victims to local hospitals, the health ministry said in a statement.

Three carriages were derailed as one train crashed into the back of another, although the exact cause of the accident has not yet been reported.

The news outlet also said the Minister of Transport, Lieutenant General Kamel al-Wazir, has ordered that the drivers of both trains be detained.

It comes after another crash two years ago at Cairo’s Ramses Station killed 24 people and caused an explosion and a fire.