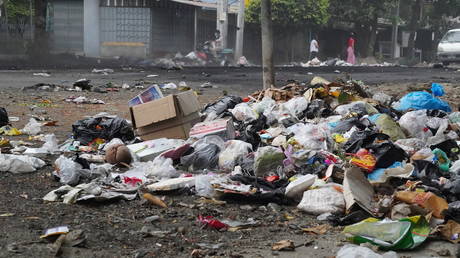 Protesters across Myanmar have covered city streets with rubbish as they launch a “garbage strike,” the latest act of civil disobedience as casualties continue to mount from the military’s crackdown on anti-coup activists.

Starting on Tuesday, pro-democracy activists are calling on residents across Myanmar to throw their rubbish into the middle of key intersections to block roads and impede the military’s attempt to secure control over the country.

Residents of Yangon’s Thaketa township participated in a ‘Garbage Strike’ on Tuesday morning by filling the streets with sacks of trash and discarded items. This new form of resistance against the junta is intended to show a dislike for the troops assaulting their neighbourhoods. pic.twitter.com/s7s8BOYdA2

Photos circulating on social media show rubbish and other items dumped in the middle of streets in cities like Yangon, as well as signs being erected expressing opposition to the military coup.

“This garbage strike is a strike to oppose the junta,” a social media post shared before the protest read. The strike went ahead despite the military warning residents on Monday to properly dispose of rubbish.

Yangon These are the scenes of the garbage strike that took place on the morning of March 30 on Baho Road in Sanchaung Township.

The strike is part of a series of demonstrations against the military coup in #Myanmar #WhatsHappeningInMyanmar pic.twitter.com/8L0U7PnTYP

It follows days of violent clashes between protesters and security forces. On Saturday alone, 141 people died on the bloodiest day since the February 1 coup, taking the death toll since the military’s takeover to more than 500.

With the military refusing to back down and anti-coup protesters continuing their actions, the UN has called for an end to the violent clashes and for Myanmar’s generals to allow peaceful demonstrations to proceed.

The Myanmar military seized control of the country on February 1, months after Aung San Suu Kyi’s NLD party won a majority in both of the legislature’s chambers, soundly defeating the USDP, which is linked to Myanmar’s security forces and is comprised of former ruling members of the junta. The nation had only been under civilian control since 2011, having spent most of its time as an independent nation controlled by its armed forces.