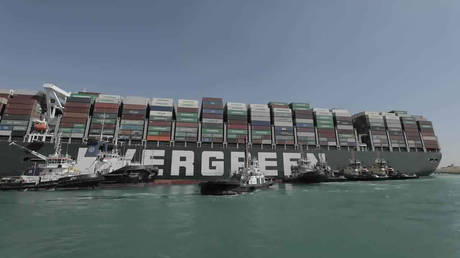 Japanese firm Shoei Kisen Kaisha says it has not received any claims against it for compensation after its giant container ship blocked the Suez Canal for almost a week, disrupting billions of dollars’ worth of trade.

Speaking to Reuters on Tuesday, Yumi Shinohara, deputy manager at Shoei Kisen’s fleet management department, said the firm was still investigating the incident and the cost incurred, “including insurance payment and potential compensation for damage.”

“There have been no claims or lawsuits against our company related to the incident,” Shinohara added without elaborating.

On Sunday, Lieutenant General Mohab Mamish, adviser to the president of the Republic for Suez Canal projects, said the Suez Canal Authority is entitled to compensation from Shoei Kisen.

General Mamish told popular journalist Amr Adib that the firm should be responsible for the costs it incurred on the Suez Canal Authority, including for damages caused by the ships grounding, the cost of tugboats and equipment used to refloat the ship, and the financial losses incurred by blocking the canal.

Shoei Kisen’s comments to Reuters come after the giant container ship, the Ever Given, was refloated on Monday and exited a tight passage of the Suez Canal, allowing traffic to resume once again. On Tuesday, the ship could be seen moored in the Great Bitter Lake, a midpoint in the canal, just north of where it blocked the waterway for nearly a week.

On Monday, the world’s largest integrated shipping company, Maersk, warned that the Suez blockage has already triggered a series of further disruptions and the ramifications on shipping and the global supply chain may take months to unravel.

Data from shipping expert Lloyd’s List suggests as much as $9.6bn of goods were held up each day by the Ever Given. On Saturday, the chairman of the Suez Canal Authority, Osama Rabie, said the state-run body was losing around $14 million to $15 million for every day the canal was blocked.