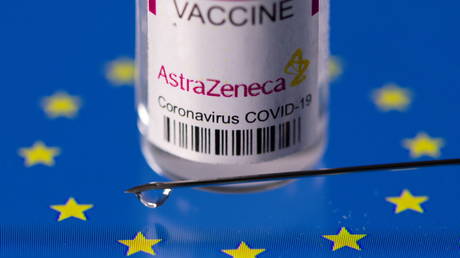 Covid vaccine manufacturer AstraZeneca has told the EU it is under no legal obligation to the UK, or any other nation, that would stop it meeting its delivery targets to the bloc, according to a European Commission spokeswoman.

The comments, made during a Commission news conference on Tuesday, come amid a dispute between London and Brussels over vaccine supplies, and follow British Health Secretary Matt Hancock claiming AstraZeneca had agreed to prioritize supplies to the UK.

“AstraZeneca confirmed to us not being under any obligation to other parties that would impede to complete the fulfilment of its obligations,” the EU Commission spokeswoman said, citing Europe’s contract with the pharmaceutical company.

On March 25, Hancock claimed in an interview with the UK’s Financial Times that Britain had negotiated “an exclusivity deal” with AstraZeneca, arguing that the EU’s agreement was inferior and that the UK is entitled to get priority access to its supply of vaccines.

According to the Commission spokeswoman, under article 13.1 of the agreement, AstraZeneca said it would not sign off legal obligations that would limit its ability to meet EU delivery targets.

EU leaders are due to meet for a virtual summit on Thursday to discuss how to improve the vaccine rollout across the bloc in light of AstraZeneca’s reduction in its second quarter delivery target from 180 million doses to 70 million.

Earlier this month, numerous European countries suspended the use of the AstraZeneca vaccine over concerns that it was linked to the development of blood clots in recipients. After the European Medicines Agency (EMA) confirmed the jab was safe, most countries restarted use of the vaccine, with a handful maintaining the temporary suspension while they investigate the potential risks it poses.