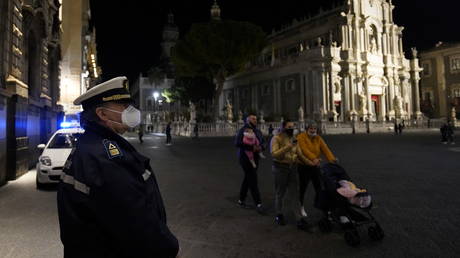 The councilor for health of the Sicilian region, Ruggero Razza, resigned on Tuesday amid an investigation into allegations that data presented to national officials was rigged to avoid tougher lockdown restrictions in the area.

The investigation centers around allegations that the Sicilian regional government rigged figures provided to Italy’s National Health Institute (ISS), with police claiming they have evidence of around 40 incidents of forged data since November 2020.

A wiretap revealed by Italian media outlets reportedly caught Razza asking an official to “spread out a little” data on deaths from coronavirus, affecting the information the national government used to determine whether to increase or ease Covid restrictions in the regions. Police have seized communication devices owned by Razza.

The councilor for health’s departure comes after three employees of the regional government were placed under house arrest by local police over the allegations. Although police believe that Razza was “partially involved in the criminal activities,” they have said that they currently don’t have any serious evidence against him.

Razza has denied any wrongdoing and, in a statement, claimed that “to save the administration from unavoidable controversy, I have asked the regional governor to accept my resignation.”

Italy currently has a four-tiered system in place – white, yellow, orange, and red – with each zone requiring different Covid restrictions to help prevent the nation’s healthcare system from being overwhelmed.

Sicily is currently ranked as an orange zone, where you can only travel within your town and are prohibited from visiting other municipalities unless for an essential reason.

Since the start of the pandemic, Italy has recorded the sixth highest number of coronavirus cases – more than 3.5 million – and seventh highest fatality rate, with nearly 108,000 deaths.