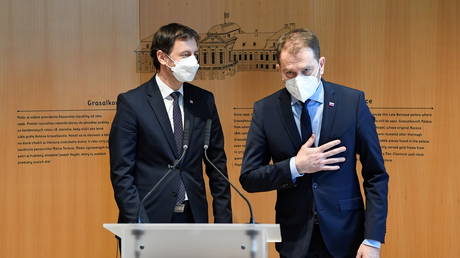 Slovak Prime Minister Igor Matovic, who bought Sputnik V for his country amid the EU’s sluggish Covid-19 vaccination drive, resigned on Tuesday as his coalition partners vigorously protested the arrival of the Russian jab.

President Zuzana Caputova accepted the PM’s resignation, which was made as part of a deal between the four parties in the country’s ruling coalition.

In order to end a month-long political crisis, the parties agreed to a government reshuffle, which would see Matovic switching posts with current finance minister, Eduard Heger.

The arrival of the first 200,000 doses of the Russian vaccine in early March reportedly came as a shock to other members of the coalition, who insisted that as the vaccine hadn’t yet been cleared by the European Medicines Agency (EMA) it shouldn’t be used. They also labeled Sputnik V a tool in the Kremlin’s “hybrid war” and called Matovic “Putin’s sidekick.”

Matovic defended his decision by pointing to the harsh Covid-19 situation in Slovakia and shortages of the EMA-approved Pfizer, Moderna and AstraZeneca jabs. “I can’t refuse [the opportunity] to save our people with a quality vaccine only because it’s made in Russia… I am not a killer,” the PM said.

The coronavirus situation in Slovakia has improved in recent weeks, but in early March the state registered the second highest Covid-19 death rate per capita in the world, behind the Czech Republic. Slovakia, which has a population of 5.5 million, has recorded more than 357,000 Covid-19 cases and almost 9,500 fatalities since the start of the pandemic.

Sputnik V, which boasts an efficacy of over 91%, filed for registration in the EU in February, but the EMA has appeared in no hurry to greenlight the Russian vaccine. However, member states can import vaccines for emergency use even if they haven’t been approved by the bloc’s regulator.

This clause had already been used by Hungary, which got the Russian jab ahead of Slovakia. On Tuesday, Austrian Chancellor Sebastian Kurz said that Vienna was also close to signing a vaccine deal with Moscow. Calls to speed up the registration of Sputnik V and organize deliveries of it to the EU have also been made in Italy and Germany.