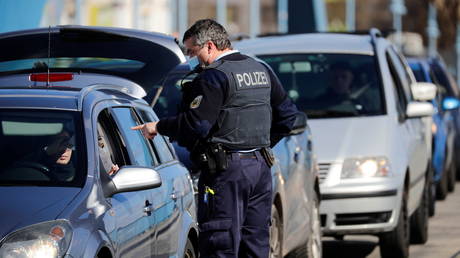 Germany and Italy have announced new Covid-19 restrictions, introducing border checks and five-day quarantine for new arrivals respectively, as a third wave of the virus sweeps across the continent, sending case numbers soaring.

The two nations independently announced the restrictions on EU travel on Tuesday, as they scramble to control new variants of the virus before their healthcare systems are overwhelmed.

The German interior minister, Horst Seehofer, declared that border controls will be tightened for at least the next eight to 14 days, warning that everyone should expect to be checked for the virus, regardless of which nation they come from. The new measures will see vehicles face random checks after crossing the border into Germany.

Italy’s Health Ministry is implementing a five-day quarantine for all arrivals from EU countries, as well as requiring a Covid-19 test before their departure and before their seclusion period ends. Rome has already imposed the same restrictions on travellers coming from non-European nations.

The EU has been faced with the dual challenge of a slow vaccine rollout. During the height of the pandemic, all 27 member states agreed to give the EU responsibility for buying vaccines, but late authorisation and problems with production and distribution have delayed shipments.

Alongside that, concerns over the use of the Oxford-AstraZeneca jab have resulted in several nations temporarily suspending its use, which delayed their domestic vaccination programs.

In the past seven days, the World Health Organization has reported over 1.6 million new Covid cases and more than 23,800 deaths from the virus, with new variants of the disease fuelling its spread.