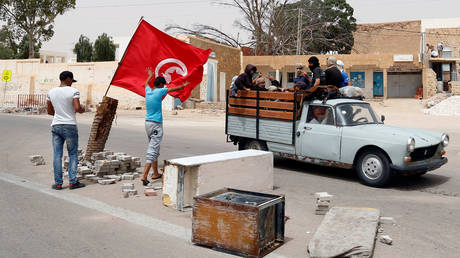 Tunisian police fired tear gas at demonstrators in an attempt to disperse crowds gathering at local government headquarters in the southern city of Tataouine, demanding action on jobs and the economy, according to local reports.

On Tuesday a group of primarily young Tunisians marched on government headquarters in Tataouine, where they called for the governor to step down. They also demanded the state do more to improve employment and investment in the region.

The protesters claim the government has failed to implement changes agreed to last November in an evolving group of economic and employment measures called the El Kamour pact of 2017.

Local media reports say clashes erupted between demonstrators and police near the government office that protesters had attempted to storm with the intention of holding a sit-in demonstration on Tuesday. Witnesses told Reuters by telephone that the protestors threw stones at police and burnt tires.

Activists staged a general strike on February 24 over the government’s alleged failure to implement the 2020 evolution of the El Kamour agreement to boost investment in local infrastructure and create new job opportunities. It was pledged by the government in 2017 after a series of protests over the lack of jobs for locals despite operational oil and gas sites in the area run by French and Austrian firms, but further discussion in 2020 saw specific deadlines added.

Unemployment in the region is around 30%, one of the highest in Tunisia.

The country’s government is already facing a political crisis, with Prime Minister Hichem Mechichi at loggerheads with President Kais Saied.