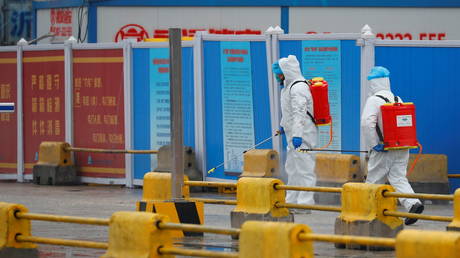 China has rejected allegations made by the World Health Organization (WHO) chief, who claimed researchers had trouble “accessing raw data” while in Wuhan. It insists that local and foreign scientists used the exact same databases.

Speaking at a press briefing on Wednesday, co-leader of the joint China-WHO study into the origins of the novel coronavirus, Dr. Liang Wannian shot back at the explosive allegations.

“Of course, according to Chinese law, some data cannot be taken away or photographed, but when we were analyzing it together in Wuhan, everyone could see the database, the materials – it was all done together,” Liang stated.

He also rejected allegations that the publication of the Wuhan report has been repeatedly delayed on purpose, insisting that the slow pace simply stemmed from the need to verify “every sentence, every conclusion, every piece of data.”

“Throughout, we always upheld the principle of ‘quality comes first’,” Liang said.

The statement from the top Chinese official, who leads the country’s special committee of experts on Covid-19, comes after WHO Director-General Tedros Adhanom Ghebreyesus claimed the UN health watchdog’s scientists had trouble “accessing raw data” while in China.

“In my discussions with the team, they expressed the difficulties they encountered in accessing raw data,” the WHO boss stated. “I expect future collaborative studies to include more timely and comprehensive data sharing.”

The allegations followed the publication of the 120-page WHO report, compiled after the international fact-finding mission visited China’s city of Wuhan, where the novel coronavirus was first identified. The team had not found the origins of the virus, yet they effectively ruled out the much-propagated idea that the outbreak might have been caused by a lab leak, describing such theory as “extremely unlikely.”

“It is equally essential that we voice our shared concerns that the international expert study on the source of the SARS-CoV-2 virus was significantly delayed and lacked access to complete, original data and samples,” a joint statement, signed by Australia, Canada, the Czech Republic, Denmark, Estonia, Israel, Japan, Latvia, Lithuania, Norway, South Korea, Slovenia, the UK and the US, reads.

China’s Foreign Ministry said that the country had “offered [the] necessary facilitation for the team’s work”, and warned against “politicizing” efforts to identify the origins of Covid-19.