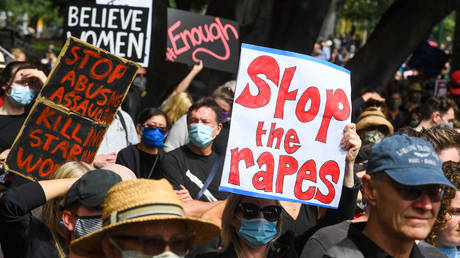 Australia’s politicians and judges will no longer be exempt from the rules against workplace sexual harassment, PM Scott Morrison has promised as the government continues to struggle with the fallout of multiple sex scandals.

The upcoming overhaul was announced by Morrison on Thursday, as the government released its long-awaited response to the damning Respect@Work report compiled by Sex Discrimination Commissioner Kate Jenkins over a year ago.

“Sexual harassment is unacceptable,” the PM stated. “It is not only immoral and despicable and even criminal, but particularly in the context of the Respect@Work report, it denies Australians, especially women, not just their personal security but their economic security.”

According to the report, nearly 40% of women and 26% of men had recently suffered sexual harassment at the workplace. While Morrison described the report as a “game-changer” he did not commit to fully implement all 55 recommendations envisioned by Jenkins. Some of the recommendations will be adopted wholly, others will be implemented only partially or in principle.

The upcoming changes include making sexual harassment a valid reason for dismissal in workplace laws. Complainants will be given more time to come forward with their claims, with the period being extended from the current six months to two years.

Public servants like judges and politicians will no longer be exempt from the sexual harassment rules. Still, it remained unclear what new repercussions the potential offenders might face, as they can already be prosecuted for criminal assault. MPs cannot be sacked for serious misconduct because they are elected to parliament by voters, Morrison explained.

“There are many issues that we’re still going to work through as we draft this legislation. The recommendations are not, I’d say, granular when it comes to the drafting in many of those provisions and how those matters are worked through. What’s important, though, is the principle that is established,” he said, adding, “We’re also going to be taking up the recommendation that state public servants are not exempt from these arrangements.”

While the PM primarily hailed the March 2020 Respect@Work report for the upcoming changes, he also admitted the multiple sex scandals that rocked the Australian political sphere in recent weeks might have given the government a boost to finally make its mind up on the upcoming overhaul.

“There is no doubt that events of recent months reinforced the significance and highlighted it [the issue] once again and the frustration that I think is felt,” Morrison stated.

The ongoing sex scandal kicked off after a former Liberal staffer Brittany Higgins claimed she had been raped by a male colleague in the office of Defence Minister Linda Reynolds. The scandal was followed by allegations of a 1988 rape raised against a government minister – who turned to be the now-former attorney-general Christian Porter. The allegations have ultimately resulted in his downfall.

Late in March, the sex scandal was further fueled by a whistleblower who leaked graphic imagery, filmed by male staffers in the parliament, who engaged in assorted sex acts at their workplaces.