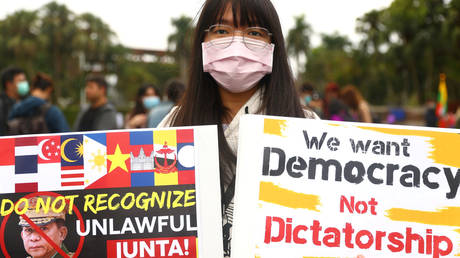 Twitter has launched a new #MilkTeaAlliance emoji, so users can back the “pro-democracy” movements in Hong Kong, Myanmar, Taiwan and Thailand. Twitter encourages dissent, it seems, but only the right kind of dissent.

“To celebrate the first anniversary of the #MilkTeaAlliance we designed an emoji featuring 3 different types of milk tea colors from regions where the Alliance first formed online,” Twitter announced on Thursday, revealing that the colorful emoji would be automatically added to any tweet featuring the hashtag.

🧵Today we are launching an emoji for the #MilkTeaAlliance, an online solidarity alliance first started in April 2020 as a Twitter meme which has grown into a global pro-democracy movement led by activists and concerned citizens in 🇭🇰🇹🇭🇹🇼🇲🇲 and around the world.

The hashtag itself has been used by anti-China campaigners in Taiwan and Hong Kong, as well as anti-monarchists in Thailand and opponents of the military coup in Myanmar that ousted democratically elected leader Aung San Suu Kyi in February.

According to Twitter, the hashtag has been used more than 11 million times since last April, surging in popularity again during the February coup.

The US media has been sympathetic to the protesters in all four countries, and the US government has backed them with more than just words. President Joe Biden has sanctioned Myanmar’s current military regime, pledged support to Taiwan via a four-way strategic alliance with Australia, India and Japan, and continued Donald Trump’s policy of withholding trade privileges from Hong Kong over China’s encroachment on the city-state’s autonomy.

The simple fact that Twitter condemns certain riots (US/India) while promoting & encouraging voices of other rioters in Asia only confirms what we already knew:

Twitter is not at all a free speech platform but another weapon of those desperate contemporary colonists. https://t.co/ixz7EaJN24

With Republicans and Democrats alike supporting such moves, Twitter’s bespoke emoji isn’t likely to ruffle any feathers in Washington. However, the social media giant doesn’t treat all protest movements equally, and dissidents at home don’t get their own hashtags and emojis. More often than not, they get banned.

Twitter has created custom emojis for the #MeToo and #BlackLivesMatter movements, and CEO Jack Dorsey gifted a whopping $10 million to controversial “anti-racism” scholar Ibram Kendi last year, to help him set up a “Center for Antiracist Research.”

BLM, however, was a corporate- and establishment-approved movement. Americans expressing doubt over the results of the 2020 election, on the other hand, found themselves banned from Twitter and their posts hidden behind warning labels. Twitter removed then-President Trump himself from Twitter in January, after he repeatedly called Joe Biden’s electoral victory fraudulent, and Dorsey suggested afterwards that he would continue banning right-wing accounts.

Even before the election in November, Twitter suspended the New York Post for publishing an article about Joe Biden’s son, Hunter, and his allegedly crooked foreign business dealings. Other users were restricted from sharing the story, which was seen as damaging to Biden’s campaign.

Yet when it comes to protest movements abroad, Twitter believes in freedom of speech. “Twitter recognizes that the #OpenInternet is increasingly under threat around the world,” a follow-up tweet to Thursday’s announcement read. “We strongly believe that having access to the free and #OpenInternet is an essential right and remain a staunch defender and advocate of free expression.”