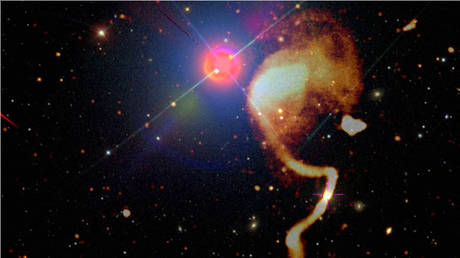 Europe’s giant LOFAR radio telescope, consisting of 70,000 individual antennas stretched out across Europe from Ireland to Poland, has captured breathtaking images of distant galaxies shortly after the dawn of the universe.

The telescope’s field of view is about 300 times the size of the full moon, and is capable of detecting the faintest of low energy light, which can then be processed into stunning visual representations that humans can appreciate.

The majority of the ultra energetic particles captured in the images shared by LOFAR researchers are invisible to the human eye while also travelling close to the speed of light, a tall order for even the most technically gifted astronomers to capture.

Thankfully, with a bit of patience and a lot of scientific expertise, and patience, the telescope captured a vast swath of the sky in the Northern hemisphere, including the births of stars scattered across tens of thousands of galaxies.

The most distant objects detected were from a time when the universe was just one billion years old, or almost 13 billion years ago.

“The light from these galaxies has been travelling for billions of years to reach the Earth; this means that we see the galaxies as they were billions of years ago, back when they were forming most of their stars,” said Philip Best, from the University of Edinburgh, who led the telescope’s deep survey.

All told, the telescope captured a jaw-dropping four petabytes of raw data, 1.6 times the data storage capacity of the human brain or five times the entire Google database. Among the data are supernovae, galactic cluster collisions and active black holes, blasting out high-energy radiation in vast jets.