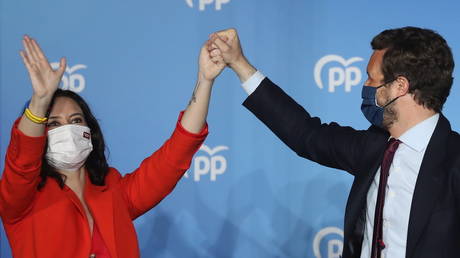 With more than 99% of the ballots counted late on Tuesday night, Ayuso’s People’s Party took 45% of the vote, or 65 seats in the regional legislature, just four shy of an outright majority. Doubling its share of the vote compared to the last race in 2019, the People’s Party is expected to enter into a coalition with the right-wing Vox Party, which itself took fourth place with 9% of the vote.

The premier’s campaign was fueled in no small part by her opposition to lockdowns, appealing to voters weary of draconian restrictions while refusing to shutter bars and restaurants during the health crisis.

Tuesday’s race dealt a blow to leftist factions, seeing the Socialist Workers’ Party slip 10 points and 11 seats compared to 2019, tying with the progressive Mas Madrid. In fifth place behind Vox came Podemos, a left-of-center party founded in 2014 in opposition to European austerity policies. Though it gained three additional seats, the relatively poor showing led Podemos founder Pablo Iglesias to declare his exit from politics, saying “We have failed; we were very far from putting together a sufficient majority.”

“I am not a political figure who can contribute to our political force or help consolidate its institutional strength,” Iglesias added.

Spanish PM Pedro Sanchez – a leading member of the Socialist Workers’ Party whose Covid-19 policies were frequently slammed by Ayuso – took to Twitter late on Tuesday night to acknowledge her win.

“The polls have given Ayuso a great result and, above all, a great responsibility. Congratulations,” he said. “The [Socialist Workers] will always be ready to work for a better Madrid and turn its votes into a force for the future for the region and its people.”

The election campaign in Madrid, Spain’s capital and a city of 7 million, has been fraught with heated rhetoric and at times threats of violence, with several candidates, including Ayuso and Iglesias, receiving death threats from opponents. In early April, a regional office for Podemos was hit with a firebomb, prompting Iglesias to blame the “far right,” calling the attack “street terrorism.” A party spokesman claimed it was the sixth time a Podemos office was targeted by vandals.