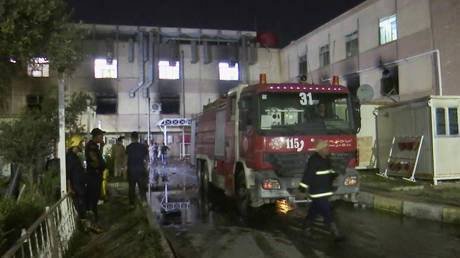 Iraqi health minister Hassan al-Tamimi has formally resigned from the government over a deadly fire that took the lives of 82 people after an oxygen tank exploded at a Baghdad hospital that was treating Covid patients.

The resignation comes days after Prime Minister Mustafa al-Kadhimi suspended al-Tamimi from his cabinet position pending an investigation into the cause of – and the response to – the April 24 fire at Ibn al-Khatib Hospital.

The Iraqi government confirmed that the health minister had resigned in a statement released on Tuesday, alongside confirmation of the removal of the director of Ibn al-Khatib Hospital and other senior figures at the medical facility.

Iraq’s health system has long struggled to meet medical demands in the country, even before the Covid pandemic, as conflict, international sanctions and domestic corruption have led to the sector being neglected and to necessary improvements being ignored.

The oxygen tank explosion was an accident, according to Iraqi officials. It took the lives of 82 people and injured a further 110. Among the dead are at least 28 Covid patients who were removed from ventilators in order to evacuate them during the blaze.

Civil defense officials have said the fire was able to spread quickly as the facility lacked adequate protection systems and had false ceilings.

In the wake of the blaze, Prime Minister al-Kadhimi released a statement declaring that the “incident is evidence of negligence” and that he had “directed that an investigation be launched immediately.”

The Iraqi leader also announced the country would hold three days of national mourning over the deaths, with the parliament dedicating the entirety of its session on April 26 to remembering those lost.