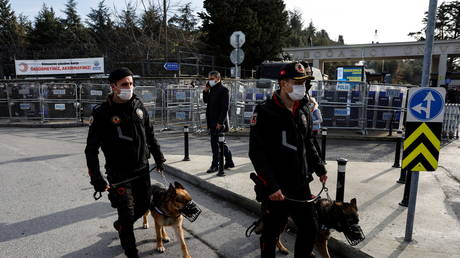 Turkish security forces have carried out raids across the country’s largest city, arresting eight individuals in relation to suspected links to Islamic State (IS, formerly ISIS), according to a state-run news agency.

Anadolu Agency, a state-run news agency headquartered in Ankara, said on Friday that at least eight individuals had been detained by police as anti-terror units simultaneously raided 15 addresses in 10 districts of Istanbul.

Security forces told the news agency that the individuals were detained for suspected links to IS and its operations in conflict zones. The suspects remain in police custody and under investigation.

Turkey declared ISIS a terrorist organization in 2013 and has engaged in a number of operations to defeat the group, which once occupied territory close to its south-eastern border.

The country has been attacked numerous times by people affiliated with IS. More than 300 people have died and hundreds more injured in at least 10 suicide bombings, seven incendiary attacks, and four assaults.

On Sunday, Istanbul police said they had captured the alleged military head of IS and a close aide to the group’s former leader, Abu Bakr al-Baghdadi. A police statement said he had been arrested in the Atasehir district on the city’s Asian side last Wednesday.

The man, identified only by the codename ‘Basim’, had been travelling on false passports.