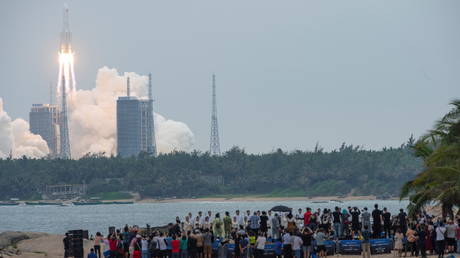 The out-of-control Long March 5B rocket that has fascinated the Western media so much re-entered the Earth’s atmosphere over the Indian Ocean and burned up, the Chinese space engineering agency has said.

The much-covered piece of space junk, which used to be the Long March-5B Y2 rocket that delivered part of China’s space station into orbit on April 29, was expected to come down during the night between Saturday and Sunday. Initial estimates from the China Manned Space Engineering Office, a department of the People’s Liberation Army, placed the re-entry in Eastern Mediterranean.

However, the CMSE said the rocket made re-entry at 10:24 am Beijing time (02:24 GMT) and fell into the open ocean around 72.47 E longitude and 2.65 N latitude. Most of it burned up on re-entry, as the Long March descended at the average speed of 8 kilometers (five miles) per second.

An earlier statement from the same department put the re-entry point at 34.43 degrees north latitude and 28.38 degrees east longitude, which is above the Mediterranean Sea, about 200 kilometers off the southern coast of Turkey.

Minutes before the statement appeared in the media, witnesses reported observing a bright object streaking throught the night skies in the Middle East, with reports and videos pouring in from countries like Jordan and Oman. After the spectacular fly-by the rocket headed over the Indian Ocean and flew over Perth, Australia, according to online trackers.

#CZ5B Confirmed sighting from Haifa Israel opprox 2:11 UTC. It was a little bit early and northern than predicted. Bright object on the left is Jupiter.@planet4589 pic.twitter.com/aJYbs0qoXy

The uncontrolled descent of the 30-meter (100-foot) rocket booster, weighing more than 22 tons, had the media across the world abuzz for days, as no one could predict where it might re-enter – and if it would cause any damage if it crashed on an inhabited area.

Beijing sought to reassure everyone, however, with Foreign Ministry spokesman Wang Wenbin telling reporters Friday the rocket was made from material designed to burn up on reentry, and that most of the debris would disintegrate.

“The threat to air navigation and objects on the ground is extremely low,” he said.

Also on rt.com
Chinese space debris? Danger, watch out, it could fall on you! American space debris? It’s a cinematic, dazzling light show!