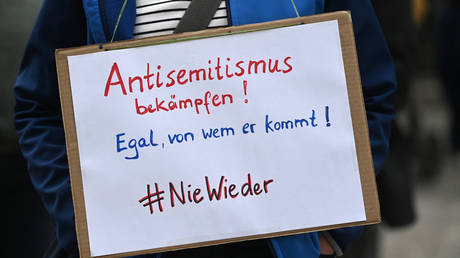 Those who committed ‘anti-Semitic’ acts should be barred from acquiring German citizenship, an interior policy spokesman for Chancellor Angela Merkel’s party in the Bundestag said ahead of the voting on the issue.

“The Citizenship law should expressly prohibit naturalization of people who have committed anti-Semitic acts,” Mathias Middelberg, a lawmaker from Merkel’s Christian Democratic Union (CDU), told the German NOZ newspaper ahead of the parliamentary debate on the amendments to the citizenship law that are to be voted on later this week.

The list of “anti-Semitic” crimes should particularly involve acts aimed against the State of Israel, the MP believes.

Anyone who incites the public against Jews, questions the existence of the State of Israel, or burns an Israeli flag must not become a German citizen.

In his speech, the MP also referred to Merkel’s own speech she delivered back in 2008 when she said that responsibility for Israel’s security is a part of Germany’s national interest. Such words should not be “left unattended,” he said.

Middelberg seeks to amend the existing law with a clause stating that “naturalization is excluded if a foreigner has committed an anti-Semitically motivated act.” He also argued that any anti-Semitic acts should be legally declared incompatible with the guarantees of human dignity enshrined in the constitution, called the Basic Law in Germany.

The MP already called on Merkel’s conservative bloc’s partners within the government coalition – the Social Democrats – to support the proposal during the upcoming parliamentary vote.

Last month, Germany saw a string of attacks on Jewish prayer houses that sparked outrage among Jews, Christians and German officials. The incidents, which mostly involved burning Israeli flags and pelting synagogues with stones, came amid a violent standoff between Israel and Palestinian militants in Gaza. Some of the perpetrators then told the German police their actions were provoked by the “current conflict in Israel.”

The developments drew sharp condemnation from top German politicians. President Frank-Walter Steinmeier said at that time that hatred of Jews would not be tolerated in Germany in any form, while calling such acts “crimes that must be prosecuted.”

Merkel said in her weekly video podcast in late May that anyone who “takes the hatred of Jews onto our streets” violates the Basic Law. The German government’s spokesman, Steffen Seibert, expressed Berlin’s support to Tel Aviv and condemned rocket attacks launched by Hamas militants against Israel by saying that there was “no justification for this violence.”

In late May, just one German state, North Rhine-Westphalia, said that probes have been launched against 111 suspects over anti-Semitic acts. Almost all of the suspects had Arab backgrounds, the regional interior minister, Herbert Reul, confirmed at that time.

The list of the perpetrators included Lebanese and Syrian citizens as well as people who came from Arab countries but had received German citizenship by the time of the incidents.

The German police, however, believe that anti-Semitism in Germany goes beyond the migrant community. “It is not just Muslim anti-Semitism but anti-Semitism as a whole that has not been perceived as it should have been for far too long,” the Berlin police’s anti-Semitism officer, Wolfram Pemp, told German media in late May. The latest Federal Criminal Police (BKA) report suggested that anti-Semitic crimes also rose by almost 16% over the last year in 2020, but provided little information about who the perpetrators were.

The leader of the center-right European People’s Party bloc in the European Parliament, Manfred Weber, rushed to blame European right-wing movements like Germany’s AfD party and France’s National Rally, which is led by Marine Le Pen, for the rise of anti-Semitism.

The AfD promptly distanced itself from such allegations by claiming that it was its ideas that Middelberg supposedly adopted while calling for a citizenship ban for ‘anti-Semites.’