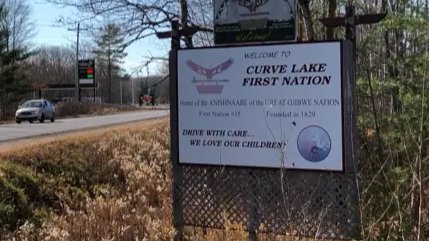 For as long as she’s been alive, Chief Emily Whetung of Curve Lake First Nation says her community has been without clean, running water.

“When you live in a place where you have reliable clean drinking water, you put your child in the bathtub and they play around, and they splash, and you don’t worry about it. When you live in a community that has constant water problems, you sit beside your child the entire time and make sure their face doesn’t go in the water,” said Whetung, who added the water is not only unsafe to sip but can be unsafe to the touch. “Many families in my community and others have to watch for skin conditions.”

Curve Lake is surrounded on three sides by fresh water and is only a short drive away from Peterborough. Yet, it’s been under boil water advisories on and off for decades, including one that lasted nearly two years before it was lifted in 2018.

Prime Minister Justin Trudeau promised to end long-term drinking water advisories in First Nations communities by this March. But that deadline came and went, and no new target date has been set.

“My job is to get it done, so for those that seek to lay blame, they should lay it on my shoulders,” Indigenous Services Minister Marc Miller told CityNews in an interview.

In 2015, there were 105 long-term advisories, meaning the water had been unsafe for at least a year. The government says it’s lifted 107 such advisories since then.

Fifty-two remain in 33 First Nations, including Neskantaga First Nation and Shoal Lake No. 40 First Nation, where advisories have existed for more than 20 years and a whole generation of children have grown up without a drop to drink from their taps.

“There are plans in place for each community to be in a position to lift their water advisories,” said Miller, who cited the pandemic’s effect on the construction industry and COVID-19 restrictions blocking access to certain Indigenous communities as reasons why the government missed its self-imposed deadline.

Funding is a persistent problem

While Ottawa has spent billions to build or repair water infrastructure, outdated policies have left First Nations severely underfunded to operate and maintain their systems. The funding policy, which leaves a standard 20 per cent deficit for the First Nations to cover, hasn’t been updated for about 30 years.

“If you’re only funded at a certain percentage, how can you possibly maintain an asset?” said Melanie Debassige, Executive Director of the Ontario First Nations’ Technical Services Corporation (OFNTSC).

Debassige said as part of the OFNTSC’s efforts to address the current lack of in-house technical staff that many First Nations face, it offers an ongoing training program to inspire Indigenous youth to become water operators. But the insufficient operations and maintenance funding means communities are not always able to properly pay and compensate operators.

“Oftentimes when you get a water operator trained, they’ll go work for a local municipality,” said Debassige. “Because the rate of pay is a lot higher than what First Nations can afford.”

Beyond the struggle to keep water safe, Trudeau’s promise to solve the crisis doesn’t include advisories on private systems, which Human Rights Watch estimates serve one in five households on First Nations in Ontario.

“It was an important, bold political statement to say that the government was going to end long-term drinking water advisories, but that is not a solution to the broader water crisis,” said Amanda Klasing, a specialist in the rights to water and sanitation. She also pointed out there is no federal regulatory framework to guarantee safe drinking water on First Nations.

“If you’re a Canadian living off reserve, when you turn on your tap, you can feel confident knowing that there are safe drinking water regulations,” she said. “That just doesn’t exist on reserve.”

Just because a community like Curve Lake is not under a water advisory, that doesn’t mean every resident has access to sufficient, affordable, and safe drinking water. Chief Whetung stressed that for First Nations to qualify for water advisories, they must meet very specific criteria laid out by the federal government.

Curve Lake’s small water treatment plant was built in the early ‘80s and designed to last just 20 years. Yet it continues to serve 56 homes in one subdivision. Most residents get their water from private wells.

“If you can’t afford to put a water treatment system into your home to make sure the water coming out of your well is safe to drink, then you have to constantly be planning to pick up bottled water,” Whetung said.

Curve Lake is taking part in a class action suit which says Canada breached its obligations to end the water crisis. The community recently received federal funds to design a new multi-million-dollar water treatment plant, but construction is still years away.

For now their water problems persist, while their neighbours have no such problems.

“It’s frustrating … to think that because those are governed provincially and we’re governed federally that there’s such a disparity in access to one of the necessities of life,” said Whetung. “I’m happy that they have clean drinking water. I would like the same thing for my community.”