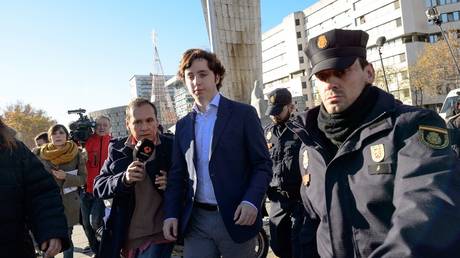 A Madrid court has ruled that Francisco Nicolas Gomez Iglesias must spend a year and nine months in jail and pay a €2,700 ($3,290) fine for forging an ID card so a friend could take a college entrance exam for him.

Over the years, the 27-year-old has baffled the media and authorities alike by posing as an envoy for the Royal Family, an adviser to top government officials, and even a secret agent.

Dubbed ‘Little Nicolas’ by the Spanish press – a reference to a character from a series of French children’s books – the young man had managed to avoid jail time until Wednesday’s verdict. Although the ruling can be appealed, Iglesias has three more pending court cases.

According to the El Pais newspaper, Iglesias first got a taste for the limelight in 2005. Just two weeks after celebrating his 10th birthday, the boy was interviewed by a TV reporter who was covering the death of Pope John Paul II. “He seemed like a saint to me,” he said of the pontiff.

Iglesias later told the media that before hitting 15, he was the director of a teenage disco popular with the children of powerful people. By using what El Pais described as “a cocktail of personal charm and extravagant lies,” Iglesias began to mingle at high-class events.

The young man was photographed next to various politicians. In one picture, he shook the hand of King Felipe IV, whose coronation he attended. The images would later serve as visual proof of a persona he presented in public: an influential man with many connections.

The first accusations of fraud came in 2012.

In the most recent development, the court found that Iglesias put a friend’s photo on his document before an exam. Iglesias denied any wrongdoing, and the friend, who was described in the media as a son of a diplomat, has done the same.

“I’ve never seen that false ID when applying for the exam,” Iglesias told the court.

The judges believed otherwise. Among the evidence were screenshots from a WhatsApp chat group where the defendant bragged to classmates about fooling the examiners, and a testimony from a high-school teacher who informed the court that Iglesias told him of the affair as well. The teacher testified that he did not report the story at the time because he did not think it was true.

The prosecution even alleged that a police officer was in cahoots with Iglesias and issued a fake duplicate ID because she knew him. The court fined the officer for negligence, while Iglesias’ friend was sentenced to a year in jail and a fine.

Yet faking an ID was hardly Iglesias’ most audacious stunt. Back in May, he appeared in court, charged with posing as an envoy of King Felipe VI and setting up a meeting with the head of Alsa, a bus services company, in 2014. Iglesias told local authorities ahead of the meeting, who reportedly prepared a “royal welcome” for the alleged conman. Iglesias had even arranged the trip to the meeting in a Madrid City Hall vehicle, accompanied by a police escort.

The businessman recalled having a “disjointed” conversation with Iglesias, who talked about Barack Obama’s foreign policy, the Ebola virus, and Catalonian independence, pausing at one point to pretend to take a call from Deputy Prime Minister Soraya Saenz de Santamaría. Suspecting something was amiss, the businessman phoned the Royal Household after lunch, and learned that they had no idea who ‘Little Nicolas’ was.

After Iglesias was arrested, investigators searched his home and found the tools of his trade. According to El Pais, “forged reports from the National Center of Intelligence (CNI), police sirens, Civil Guard badges, and various documents bearing the seal of La Moncloa, the seat of government, and the Royal Household” were all uncovered, and Iglesias remained calm throughout the search.

Despite the cases against him, Iglesias has not avoided the spotlight. He attended a UN climate summit in 2019, telling reporters he had “different meetings” there to attend, and the same year was arrested for allegedly assaulting a waiter at a Madrid restaurant.

Asked in an interview that year whether he “acted on the fringes of the law,” Iglesias replied: “Yes, yes, there’s a moment when you are so immersed in power that you can’t tell black from white. I totally recognize myself in those reports and I agree with them.”

“I would define myself as quick; a very young, sharp person who knew everyone,” he continued. “Especially the sons and grandsons of those in power because I went out with them and they liked me. And when politicians see people with a future, it’s in their interest to get close to them. Everything followed from there.”