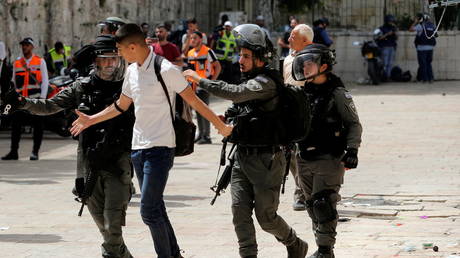 The prime minister of the Palestinian Authority has said that the ouster of Israeli longtime leader Benjamin Netanyahu closes a particularly dark chapter in Israeli-Palestinian relations.

“The departure of the Israeli prime minister after 12 years in power marks the end of one of the worst periods in the history of the Israeli-Palestinian conflict,” Mohammad Shtayyeh said, as cited by the Times of Israel.

Shtayyeh said he did not see the new government “as any less bad than the previous one” and condemned the support of Israel’s new prime minister, Naftali Bennett, for Israeli settlements in the West Bank, which are illegal under international law.

The new government has no future if it does not take into consideration the future of the Palestinian people and their legitimate rights.

The Palestinian Authority released a statement on Sunday, saying it would judge the new Israeli cabinet based on the concrete positions it would take. Striking a skeptical tone, it said the so-called ‘government of change’ would likely institute policies no different from those of the Netanyahu era, “or perhaps be even worse.”

Bennett is known for his passionate defense of Israel’s military actions against the Palestinian militant group Hamas in Gaza, and had led the West Bank settlers’ Yesha Council, before being elected to the Knesset, Israel’s parliament, in 2013.

“The Palestinians must take responsibility for their actions, and understand that violence will be met with a firm response,” Bennett said in a speech in the Knesset hours before his cabinet was sworn in.

The leader of the right-wing Yamina party and a former defense minister under Netanyahu, Bennett signed a deal with Yair Lapid, the leader of the centrist Yesh Atid party, to end Netanyahu’s 12-year rule. Overall, eight parties took part in the formation of the government, including the Arab Ra’am party.

Under the power-sharing agreement, Lapid will take over as PM after Bennett completes the first half of his four-year term.