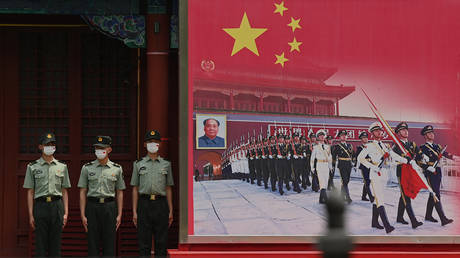 NATO Secretary General Jens Stoltenberg said that the military bloc needed to “strengthen” its strategy on countering the rise of China. Beijing doesn’t share the values of the NATO members, he added.

“China’s military buildup, growing influence, and coercive behavior poses challenges to our security. We need to address them together as an alliance,” Stoltenberg told reporters ahead of a NATO summit in Brussels, Belgium, on Monday.

At the same time, Stoltenberg said that NATO members still needed to work with Beijing on issues such as climate change and arms control.

The NATO chief made a similar point in an interview with Canadian TV channel CBC on Sunday.

“China does not share our values,” he said, referring to the crackdown on protest in Hong Kong and “how they oppress minorities like the Uighurs.”

All of this makes it important for NATO to develop a policy, to strengthen our policy, when it comes to China.

Stoltenberg said that the continuing detention of Canadians Michael Spavor and Michael Kovrig in China is “absolutely unacceptable.” The two men were arrested in 2018 and charged with espionage. Canada demanded that its nationals be released, while Beijing accused Ottawa of interfering in its domestic affairs.

The arrest of Spavor and Kovrig took place shortly after Canadian police arrested Meng Wanzhou, the daughter of Huawei founder Ren Zhengfei and the telecoms giant’s chief financial officer. Meng was taken into custody at the request of the US, where she was charged with trade secrets theft, and is currently fighting against extradition in court.

China has repeatedly accused Western countries of clinging to a “Cold War mentality” and viewing international relations as a zero-sum game. Chinese Foreign Ministry spokesperson Wang Wenbin said this month that the US defense budget was the largest in the world and “about four times that of China,” and that Washington had around 800 military bases overseas.

“It is crystal clear as to who is the threat and challenge,” he said.

NATO will also discuss Russia at Monday’s summit. The relationship with Moscow is “at its lowest point since the Cold War,” Stoltenberg said, criticizing Russia for “aggressive actions.”

Russia, meanwhile, has been saying that NATO had undermined European security by expanding the military bloc closer to Russian borders. Foreign Ministry spokesperson Maria Zakharova said last week that Stoltenberg had declined an invitation to attend a security conference in Moscow scheduled for later this month.