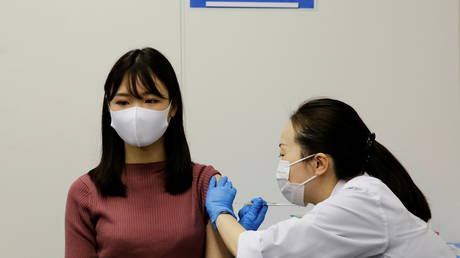 Japan’s vaccine chief has revealed an ambitious target of giving one million vaccinations daily by the end of June, with just around 5% of Japan’s population vaccinated against Covid-19 so far.

On Tuesday, Taro Kono expressed regret at not speeding up vaccination in Japan: “If I could go back all the way to the beginning, I would have probably scrapped the clinical trial that we did…it’s probably necessary for ordinary times, but in the case of emergency…like Covid-19, I think we should have started the vaccination as early as possible.”

At the same time he revealed the country will now be aiming to start giving one million vaccinations daily by the end of the month. The news of Japan’s drive to bolster its vaccination campaign has been announced as the Olympic Games loom ever closer. Whilst it is still unclear as to whether domestic spectators will be able to attend the games, 11,000 Olympians and 4,4000 Paralympians will arrive in Tokyo to compete in just under six weeks.

Japan’s current vaccine roll-out administers around 828,194 vaccinations each day. If Japan’s vaccination campaign was to continue at the same pace and the Japanese population continue to express desire to be vaccinated, it would take just over a month to vaccinate another 10% of the country.

Japan’s vaccination campaign has noticeably lagged in comparison to other countries, with a mere 5% of Japan’s population being fully vaccinated. Japanese authorities requested domestic clinical trials of the Pfizer vaccine, despite other countries ordering the vaccine based on its performance in multinational trials. It was only toward the end of May that both the Moderna and AstraZeneca vaccines were approved for usage.

On Saturday June 12, Tokyo’s main vaccination center opened its doors to under 65s looking to get vaccinated, offering both online and telephone bookings in a drive to increase vaccination speed in the country.