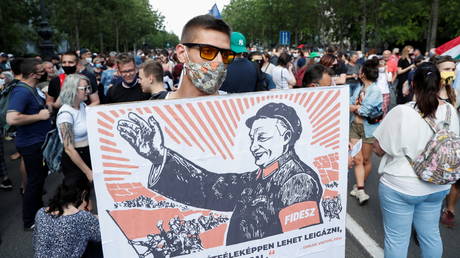 Hungary’s parliament has approved a proposal by Viktor Orban’s Fidesz government to donate land owned by the state for a planned Chinese university in the Hungarian capital despite fierce opposition.

On Tuesday, Fidesz lawmakers voted overwhelmingly to back a bill which sees Hungary donate four plots of land to a foundation which manages the development of a $2 billion Chinese university campus in Budapest.

The law states that the complete proposal for the Chinese university, the first in Europe, must be presented to the parliament by the end of 2022. At that point there will be a referendum on the plans, Prime Minister Orban said last week.

The granting of the land to the proposed campus of Shanghai-based Fudan University also saw plans for a local student housing precinct thrown out.

The proposal has already been heavily criticized, with many accusing Orban of getting too close to Beijing. “The citizens of Budapest have had their say about the government’s plans: 96% do not want a Chinese communist university in place of the (local student housing area),” said Budapest Mayor Gergely Karacsony in a Facebook post on Monday.

Karacsony is vying to face Orban in the country’s 2022 election. In early June, the mayor announced a renaming of the streets around the site of the proposed campus in a way clearly intended to irk both Orban and his Chinese counterparts. Should the planned campus move forward, Fudan University Budapest may be forced to sit between Free Hong Kong Road, Uighur Martyrs’ Road, Dalai Lama Road and Bishop Xie Shiguang Road.