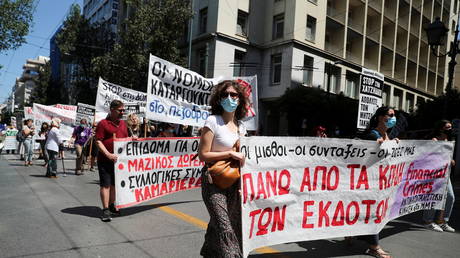 The Greek capital has been brought to a standstill as striking public transport staff down tools and take to the streets to voice their opposition to a labor reform bill which is being brought before parliament on Wednesday.

Public sector transport workers went on strike for the second time in a week as a controversial bill, which seeks to modernize the country’s labor rules, goes before parliament. The workers held banners and placards aloft, chanting slogans as they walked through the city center.

Ferries, buses and trains services were all suspended as workers downed tools. Major arteries of the city were also blocked by marching demonstrators disrupting road traffic. Workers from other sectors have also held stoppages and are expected to join the protests later today before the bill goes in front of lawmakers.

Athenians also took to the streets last Thursday as lawmakers prepared to discuss the proposed labor reforms which have been described by trade unions as a “monstrosity.”

ADEDY, the union organizing the strike, invited workers, with the exception of teachers who are overseeing exams, to join the protest and a 24-hour-strike in several statements on Tuesday, blasting the government’s attempts to block the protest movement as illegal.

“The terrorism that the government tried to exert on the workers, through the court appeal, fell into the void. They will receive the answer tomorrow with the mass participation of the workers in the strike and in the rallies,” a statement read.

One of the most controversial parts of the bill sees workers allowed to do up to 10 hours work a day and less time on another day. The bill would also see the introduction of a “digital work card” to monitor working hours and increase legal overtime to 150 hours a year. Unions fear workers may be forced to work longer hours.

The government claims that the new legislation would bring greater flexibility and reflect changes in working habits. “The only thing this bill does is it tries to give workers and employers a degree of freedom on how to arrange the eight-hour workday,” Development Minister Adonis Georgiadis said in May.