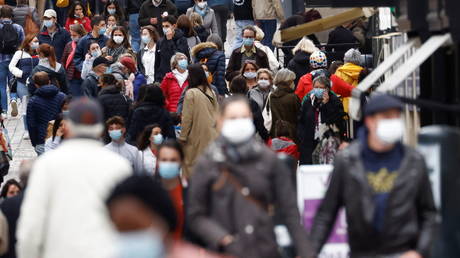 France has decided to ease its rules on wearing masks outdoors, starting on Thursday. A positive coronavirus trend has allowed the country to lift its 11pm–6am curfew ten days ahead of schedule.

The curfew, which was set to expire on June 30, will be lifted on Sunday, Prime Minister Jean Castex said. The start of the curfew has already been bumped from 9pm to 11pm earlier this month.

Starting from Thursday, people do not have to wear masks outdoors, with the exception of crowded places like street markets, playgrounds and stadiums.

Masking will remain mandatory on public transport, as well as at work, in shops and other closed spaces, with the exception of bars and restaurants.

“We have not known such a low level of virus spreading since last August,” Castex said, crediting the success to “the mobilization of the French” and the vaccination campaign. The situation was improving “faster than we have hoped,” he said.

It’s normal that we adjust our measures and certain elements of our calendar, while maintaining a high level of vigilance in the coming weeks.

The PM called vaccination “the best bulwark against the resumption of the epidemic” and once again urged everyone to get vaccinated.