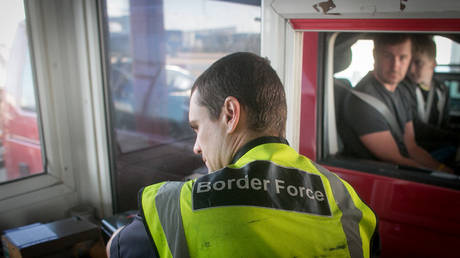 UK Brexit Minister Lord David Frost has accused the European Union (EU) of being excessively “purist” during post-Brexit trade talks, as he warns that “little progress” is being made between the two sides.

Speaking before a parliamentary committee on Wednesday, Lord Frost warned that “little progress” has been made between the UK and EU during post-Brexit trade negotiations, as he addressed concerns about the impact of the Northern Ireland protocol.

“It does seem to us…a very purist point for the EU to insist upon,” Lord Frost said addressing the ongoing row between the two sides over extending the border checks grace period.

While a grace period was first introduced to ease the UK’s transition out of the EU, Britain has called on Brussels to extend it, something that politicians within the bloc have so far refused to do. Prime Minister Boris Johnson has threatened to suspend the Northern Ireland protocol if the EU does not agree to an extension of the grace period.

While the EU has not responded to the UK minister’s recent remarks, French President Emmanuel Macron addressed the trade dispute at the G7, declaring that “inconsistencies from the British side shouldn’t be blamed on the EU.”

Also on rt.com
London urges Brussels to be ‘reasonable’ over Northern Ireland, says the protocol was drafted to be flexible

Earlier this year, violence broke out in Belfast, with individuals claiming that it was sparked by the impact of post-Brexit changes. Due to the disruption that the new system has caused to businesses, politicians in Northern Ireland and the UK have called on the EU to address concerns in order to protect peace in the region and maintain the Good Friday Agreement.