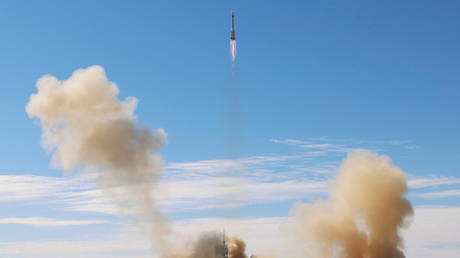 A rocket carrying the Shenzhou-12 spacecraft with three Chinese astronauts on board has blasted off from China’s Inner Mongolia in a historic launch that is critical for the completion of the country’s own space station.

China’s Long March 2F took off from Jiuquan Satellite Launch Center in northwestern China at 9.22am local time on Thursday (1:22am GMT). The launch, broadcast live by Chinese state media, will send the Shenzhou-12 spacecraft with three astronauts on the country’s longest manned mission to date and its first crewed mission in five years.

The trio will toil aboard the Tianhe (Harmony of the Heavens) capsule, the future station’s first module, launched in April.

Speaking ahead of the Shenzhou-12 launch, mission commander Nie explained that the astronauts would embark “on a whole range of diagnostic tests on crucial technology and experiments” after turning the module into a proper “home” for future missions.

While the bus-sized module’s launch went off without a hitch, the Long March 5B rocket that carried it into orbit made headlines last month, prompting wild speculations and international hysteria after it was revealed that its detached stage was free-falling back to Earth at around 15,000 miles per hour.

In a bid to alleviate concerns about the March 2F’s rocket repeating that unfortunate scenario, China Manned Space Agency Assistant Director Ji Qiming told reporters that the rocket would not pose any danger, insisting that it would burn up long before it could become a threat.

Thursday’s launch is the third of 11 planned missions needed to complete Beijing’s first-ever space station. The launches will be spread out over a period of 18 months, and another three missions will see astronauts brought to the station.

Once completed, the station will become only the second currently in operation, alongside the aging International Space Station (ISS), and with an estimated lifespan of up to 15 years, is on path to outlive it