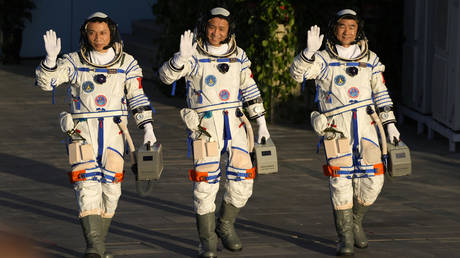 Three Chinese astronauts have entered the core module of the country’s future space station in a crucial step towards its completion, the Chinese Foreign Ministry has announced.

The trio – Nie Haisheng, Liu Boming and Tang Hongbo – successfully boarded the Tianhe (or ‘Harmony of the Heavens’) module at 6:48pm Beijing time on Thursday (10:58am GMT).

Official footage showed the men making their way through a hatch into the Tianhe module, set to be the living quarters on China’s first ever space station, which is still under construction.

“It is the historic moment that Chinese people have entered our own space station for the first time,” Foreign Ministry spokesperson Hua Chunying said in a statement.

The trio blasted off from Earth in the Shenzhou-12 spacecraft earlier on Thursday and successfully docked at the space station, which will be their home for around three months.

The astronauts will help manage the assembly of the space station’s core Tianhe module as part of China’s longest-ever manned mission and its first since 2016.

Among their tasks, the men are to test key components of the cabin, including its life support system and research equipment, while also carrying out maintenance work on the space station’s exterior.

China launched the Tianhe module into orbit on April 29, before more than 160 packages containing scientific equipment and supplies for the astronauts arrived in May, according to the China Academy of Space Technology.

The launch on Thursday is the third of China’s five missions in 2021, with more cargo and a further three crew members to be sent up to space later this year.

Beijing has also planned six more missions for 2022, including the launch of laboratory modules, cargo and more astronauts.