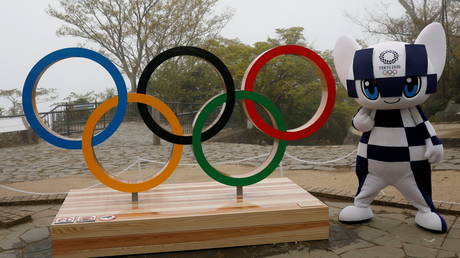 Japan is set to lift the state of emergency in Tokyo and other areas one month ahead of the Olympics, Prime Minister Yoshihide Suga has said. Certain “quasi-emergency” measures, however, will be maintained for two more weeks.

The PM confirmed on Thursday that the state of emergency in nine prefectures including Tokyo is set to expire on June 20, just one month before the troubled Olympic Games are set to kick off on July 23.

Therefore in Tokyo, as well as in six other prefectures, the blanket state of emergency will be replaced with “quasi-emergency” measures. The lower-level restrictions will stay in place until July 11. The new rules will slightly relax restrictions on alcohol, for example, allowing sales until 7pm, but restaurants and bars will still be required to close at 8pm.

The current state of emergency also strictly limits the number of spectators at mass events, allowing only 5,000 people or 50% of a venue’s capacity, whichever is smaller, to attend. On Wednesday, the limit was bumped to 10,000 for areas not under any restrictions, which is expected to remain in place for the upcoming Games.

The fate of the Olympics, however, remains uncertain, with the country’s health authority to issue its final advice on the matter on Friday. According to local media, a report to be submitted to the government and Olympics organizers by independent experts suggests that holding the sporting event with no live spectators is the least risky approach. The government, however, is expected to still allow live spectators to attend.

There’s still a possibility that the Games could be ultimately postponed or canceled altogether – even if they do begin as planned – should the coronavirus situation get out of control, Economy Minister Yasutoshi Nishimura has said. The International Olympic Committee (IOC) will have a final say on this matter, he added.

“Our top priority is to protect life and health. We will do our utmost to control infection and secure hospital beds,” Nishimura stated.

The ill-fated Tokyo Games were originally scheduled to take place last summer but were postponed for a year due to the still-ongoing coronavirus pandemic. Japan’s population has been extremely wary of the upcoming event, with multiple surveys indicating up to 80% of the country’s residents support the idea of further postponing the Games or canceling them altogether. The Olympics are feared to become a super-spreader event that might plunge Japan into a new massive wave of the coronavirus. So far, the country has registered some 780,000 cases of the disease with over 14,000 people succumbing to it.