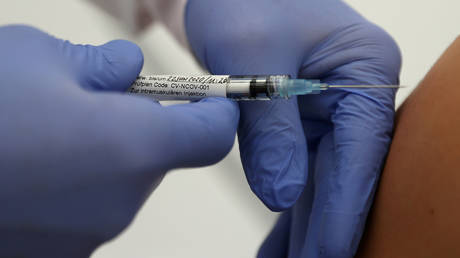 Praised just recently as “hope for the unvaccinated world,” a Covid-19 vaccine developed by Germany’s CureVac is only 47% effective against the coronavirus. As its stock collapsed, the company blamed new virus variants.

Preliminary results from second and third-phase trials on 40,000 subjects in 10 countries of Europe and Latin America show that CureVac’s jab “did not meet pre-specified statistical success criteria,” the company announced on Wednesday.

“In the unprecedented context of at least 13 variants circulating within the study population subset assessed at this interim analysis, CVnCoV demonstrated an interim vaccine efficacy of 47% against [Covid]-19 disease of any severity,” the Tubingen-based company said.

“Initial analyses suggest age and strain dependent efficacy,” the company added, as its stock collapsed on the news of failure.

“While we were hoping for a stronger interim outcome, we recognize that demonstrating high efficacy in this unprecedented broad diversity of variants is challenging,” said CureVac CEO  Dr. Franz-Werner Haas, adding that “the overall vaccine efficacy may change” as they continue towards the final analysis.

The interim analysis assessed 134 cases of Covid-19 occurring at least two weeks after the second dose was administered, of which 124 were successfully sequenced to identify variants. Only one case was due to the original virus, CureVac said. Preliminary results also showed efficacy in younger participants, but not people older than 60; the elderly are the most at-risk group for Covid-19. CureVac said it has reported the results to the European Medicines Agency.

Failure of the trial is a bitter pill for CureVac, founded by one of the German pioneers of mRNA vaccine technology, which is currently used in the US-developed Pfizer and Moderna jabs. As late as May, its vaccine was praised by the New York Times as the jab that could “bring hope to the unvaccinated world.”

Unlike the Pfizer/BioNTech and Moderna vaccines, the CureVac jab remains stable at refrigerator temperatures – just like the Russian-developed Sputnik V – which would have made it attractive to swathes of Africa, Asia and Latin America that lack deep freeze facilities. It can even sit at room temperature for 24 hours without spoiling.

The RNA technology on which it was based also offered the possibility of combining protection against multiple variants in a single shot – provided the vaccine worked. Unfortunately, that now appears not to be the case.