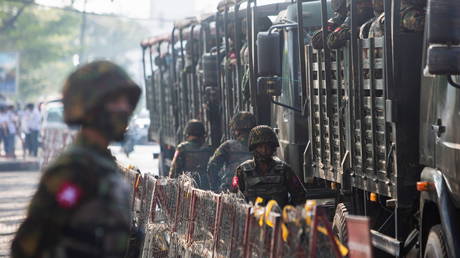 Two people have died after two explosions went off near the office of an army-backed political party in Myanmar’s largest city, Yangon, on Friday, witnesses and rescue officials said.

The first blast targeted a military truck parked outside the office of the Union Solidarity and Development Party (USDP) in Yangon’s Tamwe township.

The USDP is seen by many in Myanmar as the political proxy of the army, which took power in the February 1 coup. The party’s multiple allegations of fraud over last year’s election were used by the military as justification for their move against the civilian government of Aung San Suu Kyi.

Footage shared on social media captured one vehicle engulfed in flames as huge plumes of thick black smoke rose in the air over the purported blast site.

VIDEO: An army truck parked outside the military proxy Union Solidarity and Development Party’s office in Yangon’s Tamwe Township was blown up on Friday at around 3:25 p.m. #WhatsHappeningInMyanmar pic.twitter.com/NWUvR9AuRj

One soldier was killed and five others wounded in the truck explosion, the vice chairman of Yangon Rescue Committee, Win Thu, told Reuters. The injured troops were rushed to hospital, he added.

Eyewitnesses told tocal news outlet Irrawaddy that they saw soldiers on the truck before the blast.

The second explosion occurred in the same area a few minutes later. A passenger in a taxi was killed, while the driver sustained injuries, according to Win Thu.

“We don’t know who did it. We just picked up the injured and dead bodies using our ambulances as requested. We sent the injured people to hospital,” the rescue official said of Friday’s blasts.

A number of explosions have been reported recently in Myanmar as the security forces struggle to contain opponents of the coup, despite a violent crackdown on dissent. According to activists, at least 870 people have been killed in that crackdown, though the military junta disputes those numbers.

The army has blamed the spate of attacks on “terrorists” who, it says, are linked to the deposed government.