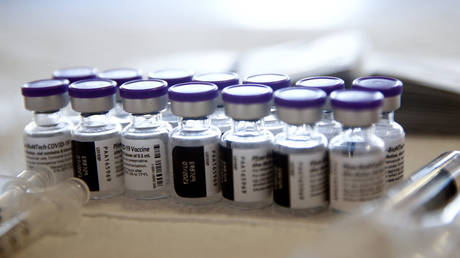 Doses of Pfizer’s Covid vaccine pledged by Israel were already too close to their expiration date when deliveries started on Friday, the Palestinian Authority (PA) said, cancelling the deal to exchange 1 million shots.

Earlier the two had agreed that Israel would swiftly transfer its short-dated doses of the jab to Palestine so that it could speed up its lagging vaccination drive. In exchange, the Jewish state was to receive the fresh ampules of the vaccine that Pfizer had been scheduled to deliver to the PA in autumn.

But when the first shipment of 90,000 doses arrived in Palestine late on Friday, it turned out that they “didn’t conform to the technical specifications as previously agreed upon, and that their expiry date was too close,’’ said Palestinian Health Minister Mai Alkaila.

After this information was relayed to Palestinian Prime Minister Muhammad Shtayyeh, “a decision was made to cancel the deal,” Alkaila told a press-conference in Ramallah.

Instead, the PA will continue to exert pressure on Pfizer to supply the 4 million doses of the jab that Palestine already paid for as soon as possible, according to the minister.

Also on rt.com
Israel to transfer more than 1 million Covid-19 shots which are due to expire to Palestinian Authority

‘‘The prime minister has confirmed that the government refuses to receive vaccines that are about to expire,” government spokesman, Ibrahim Melhem, said during the same press conference. The doses that were shipped on Friday have been already sent back to Israel, he added.

The Israeli authorities haven’t yet officially reacted to the cancellation of the deal. But Army Radio quoted an unnamed Health Ministry official who insisted that “the vaccines are fine.”

Reports in Israeli media suggested that the doses that were only good until the end of June or July were delivered to Palestine first so that they wouldn’t go to waste. The rest of the ampules in the Israeli batch allegedly had later expiration dates.

Israel, which has fully vaccinated almost 60% of its population to date, has been heavily criticized by human rights groups over its reluctance to assist the occupied West Bank and Gaza with Covid immunization. The Jewish state has so far only provided shots for 100,000 Palestinian laborers who have jobs inside Israel.

Last month, Israeli Health Ministry Director-General Chezy Levy urged the government to help Palestine – where only around 30% of the population has received at least one shot of a Covid jab – as the ongoing pandemic crisis there threatened to jeopardize Israel’s own gains in the fight against the virus.